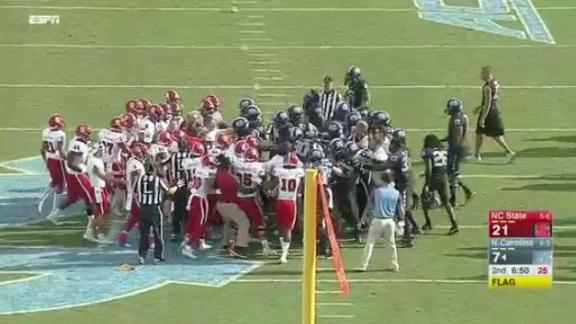 CHAPEL HILL, N.C. -- Backup defensive tackle Jalen Dalton was ejected for throwing a punch during a fight that cleared the benches during the North Carolina Tar Heels' 28-21 loss to rival NC Stateon Friday.

Referee Stuart Mullins assessed multiple offsetting unsportsmanlike conduct penalties to both teams. The skirmish broke out near midfield with about six minutes left in the half after NC State'sMatthew Dayesappeared to fumble.

The ball squirted about 20 yards downfield with at least four players trying to scoop it up. That led to a pileup near midfield, and Dalton appeared to hit Wolfpack lineman Terronne Prescod. Later in the skirmish, UNC coach Larry Fedora unsuccessfully tried to restrain Dalton by the back of his collar.

After a review, the pass was ruled incomplete.