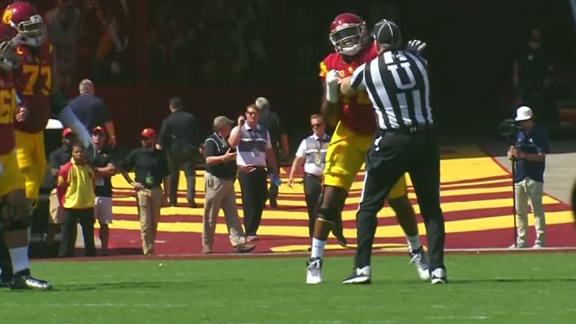 LOS ANGELES -- For the second week in a row, a USC Trojans player has been ejected in the first half after failing to keep his composure following a play.

Left tackle Chuma Edoga was ejected during the Trojans' first series of their 45-7 victory after it appeared he pushed an official, who was attempting to restrain Edoga from chasing after a Utah State Aggies player.

On the play, USC quarterback Max Browne was sacked and Edoga was pushed to the ground after it was over. He first retaliated by throwing a punch but was then pulled away from the exchange by umpire Rick DiBernardo.

"Poor decision by a young person that just got overemotional and was more looking at the defender downfield," USC coach Clay Helton said. "But he's got to be smarter. There is no excuse. We've got to make great decisions; that could cost you a game and, as you can tell, we're still learning as a team."

Edoga didn't receive the personal foul that led to his ejection until he aggressively pushed away DiBernardo's hands.

Last week, linebacker Jabari Ruffin was ejected in the first half after stomping on the groin of Alabama's Minkah Fitzpatrick. Ruffin was issued a first-half suspension against Utah State for his actions and was required to write a letter of apology.

"I definitely don't want Coach Helton getting a bad rap; (people) thinking that after two games of having two people suspended," USC right tackle Zach Banner said. "... It's not Coach Helton. It's definitely not.

Banner immediately voiced his displeasure with the sophomore's action and said several players and coaches addressed it with him after the game.

"I told him right after it happened it was bullcrap and he understands," Banner said. "He understands he did something wrong."

Edoga is playing extensively while starting left tackle Chad Wheeler struggles with plantar fasciitis. The Trojans also are playing without starting center Toa Lobendahn, who is out for the season with a right knee injury. 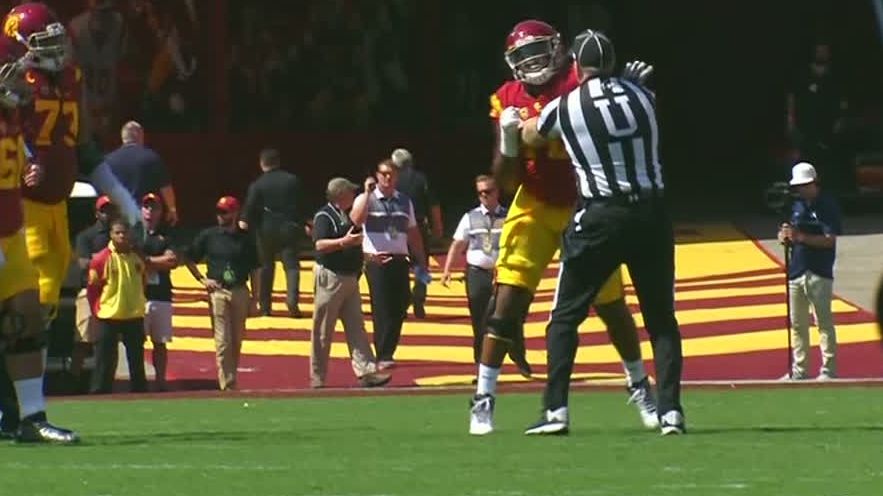