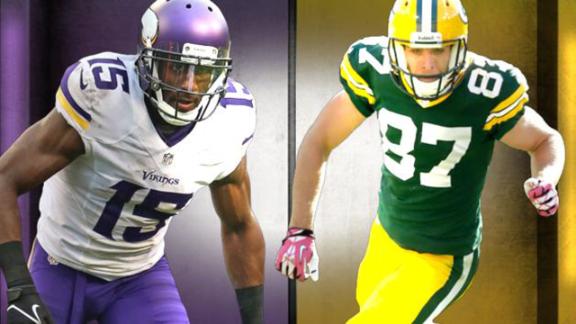 The rookie quarterback was ruled inactive for the Vikings' game against the Packers, sitting out after he sprained his ankle in his first career start last Sunday.

The Vikings started Christian Ponder, who started nine games last season but was dropped to No. 3 on the depth chart at the beginning of the year. Ponder is the Vikings' third starting quarterback in three weeks, after Matt Cassel broke his foot Sept. 21 in New Orleans.

It's the second year in a row the Vikings have used three different starting QBs in three consecutive games. Last year, the team started Cassel, Josh Freeman and Ponder in a stretch from Oct. 13-27.

Ponder, the 12th pick in the 2011 draft, has had some of his biggest moments against the Packers. His first career start came against them in 2011, and he played arguably the best game of his career against Green Bay in the final week of the 2012 season, throwing three touchdown passes and directing a game-winning drive to lead the Vikings to the playoffs.

He returns to a starting role -- at least for one week -- in a set of circumstances oddly similar to the Vikings' NFC wild-card game at Lambeau Field two years ago, when his status with a bruised elbow was in doubt all week and the Vikings started Joe Webb in a loss to Green Bay.

The Vikings, though, were undoubtedly hoping to have Bridgewater on the field after his 317-yard debut as a starting quarterback last Sunday against the Atlanta Falcons. He said Tuesday he was "much further ahead" of where he was after the game, when he sprained his left ankle on a fourth-quarter run.

Coach Mike Zimmer told SiriusXM Radio on Wednesday, though, that the Vikings would wait until Thursday to make a decision on Bridgewater, wanting to make sure they thought about his long-term health, as well.

Quarterback Chandler Harnish, whom the Vikings signed to their practice squad Monday and added to their active roster Thursday afternoon, was Ponder's backup against the Packers.

The Vikings also were without linebacker Chad Greenway, who had been ruled out for Thursday's game with a broken rib and broken hand. There weren't many surprises among their other inactives: defensive end Scott Crichton, linebacker Brandon Watts, guard Austin Wentworth, guard David Yankey and tight end Kyle Rudolph.

Brad Jones was active after missing three games with a quad injury, but Jamari Lattimore remained the starter at inside linebacker.