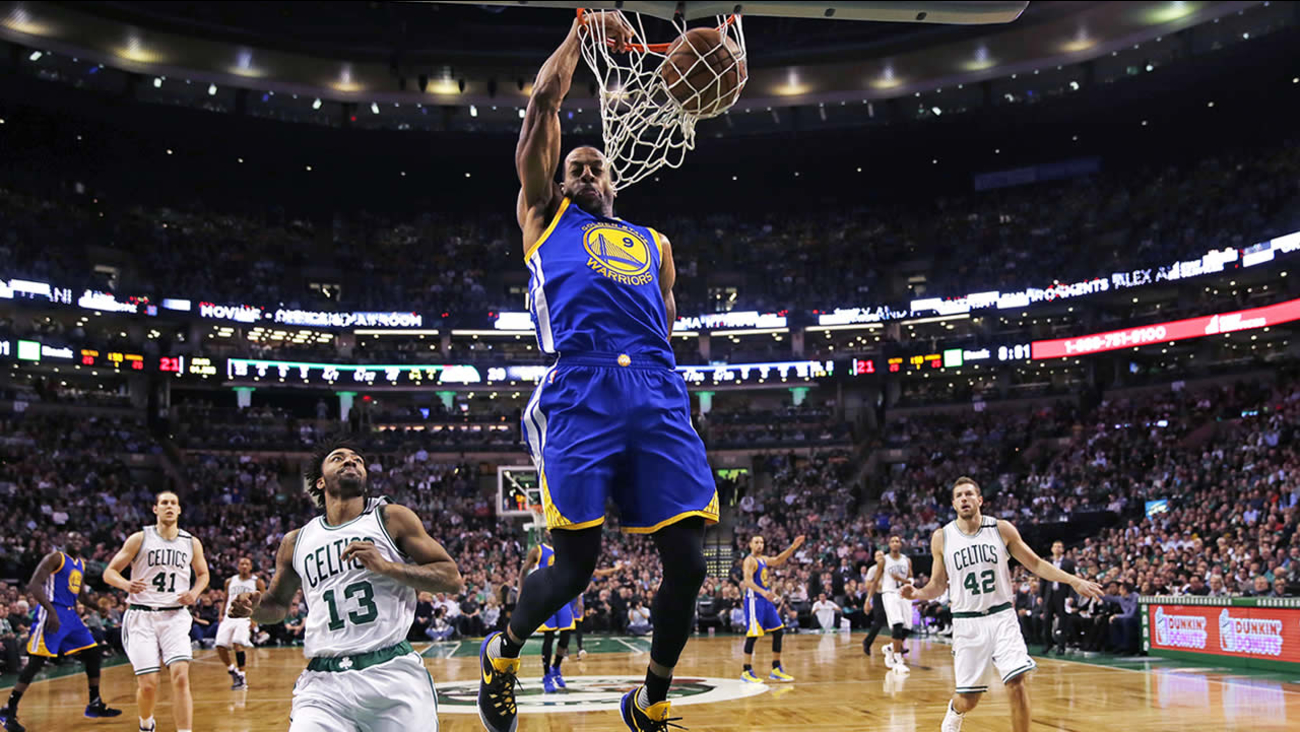 BOSTON (KGO) -- The Golden State Warriors beat the Boston Celtics 124-119 in double overtime and broke the record for the 2nd longest winning streak in NBA history with 28 games.

You can breathe now, #DubNation. The #Warriors are 24-0! pic.twitter.com/iTszm4TDax

Stephen Curry scored 38 points with 11 rebounds and eight assists and the Warriors improved to 24-0 this season by outlasting the Celtics Friday night.

Counting the wins in their final four games last season, the defending NBA champions have taken 28 in a row. They broke a tie with the 2012-13 Miami Heat for the second-longest winning streak in league history, and now trail only the 33 straight by the Los Angeles Lakers in 1971-72.

And the Warriors did it despite his worst-shooting night of the season.

Curry made only 9 of 27 shots from the field. But he was 6 for 13 from 3-point range and a perfect 14 of 14 from the free throw line, sinking a pair of foul shots with 13.4 seconds left to give the Warriors a three-point lead - his only points of the second overtime.

"Nothing was pretty about this game," he said.

Jae Crowder then missed a 3-pointer to tie it, and Andre Iguodala got the rebound and drew the foul. That sent the Boston fans to the exits, but the Golden State crowd remained to see Iguodala sink both free throws and keep the winning streak alive.

The Warriors play the Milwaukee Bucks on Saturday night to complete a seven-game road trip. No NBA team has ever gone 7-0 on a single road trip.

Kelly Olynyk scored 28 points for Boston, and Avery Bradley had 19 while guarding Curry much of the night. Isaiah Thomas had 18 points and 10 assists, and Jared Sullinger had 13 rebounds for Boston, which had won two in a row and six of its previous eight games.

Draymond Green scored 24 points with 11 rebounds, eight assists and five blocked shots. Iguodala scored 13 with 10 boards and Festus Ezeli had 12 and 12 for Golden State, which was playing without injured Klay Thompson and Harrison Barnes.

The game brought a playoff atmosphere and a sold-out crowd to the new Boston Garden, but this time the loyalties were more divided than usual. Although the Celtics' green still dominated, there was plenty of Golden State blue as well.

Fans crowded around the Golden State end of the court during warmups to watch the defending NBA champions and their star. During introductions, the Celtics rooters struggled to drown out the cheers for Curry.

After the game, Golden State fans remained long after the final buzzer, cheering Curry when he went to the locker room after his postgame, on-court TV interview.

Stephen Curry has hit a three in 88-straight regular-season road games, a new NBA record for most consecutive road games with a three.

Ever wonder how @warriors Stephen Curry shoots in warm-ups? Here's how he did tonight. That right corner...🔥🔥🔥 pic.twitter.com/DJhfrEnits

For tonight: Leandro Barbosa (illness) is available to play.