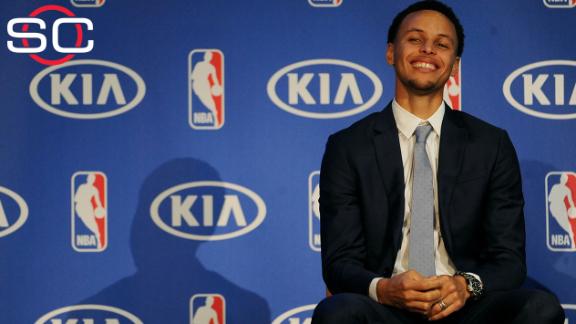 OAKLAND, Calif. -- Golden State Warriors point guard Stephen Currywon the NBA's MVP award Monday, beating out Houston's James Harden in a race that turned out to be not that close.

Curry received 100 of 130 first-place votes for a total of 1,198 points from a panel of 129 writers and broadcasters, along with the fan vote on the NBA's website.

"There were obviously good times and bad times. Times I wanted to shut it down," Curry said of his road to becoming an NBA player and league MVP. "It just made me feel like how blessed and thankful I am to be in this position."

Harden, who averaged 27.4 points and said in early April that he had "done enough"to win the MVP award, earned 25 first-place votes and 936 points.

"That's tough, but we're in the second round of the playoffs, and I got better things to worry about -- and that's the Clippers," Harden said after Monday's shootaround before Game 1 of the Western Conference semifinals. "[The Warriors are] a very good team that's rolling right now and it didn't work out, but there's more of the season to continue to play."

Added Rockets teammate Dwight Howard: "All of us are pretty upset he didn't win, but our goal is to win the championship."

"Disappointed? No, I'm not disappointed," said James, a four-time MVP. "I think it's well deserved [for Curry]. I mean, you see, first of all, the team success, that's the first thing that pops out."

Curry carried the top-seeded Warriors to a club-record 67 wins, surpassed his own record for 3-pointers in a season with 286 and added to his growing reputation as one of the most entertaining spectacles in sports.

"He's the catalyst of that whole ship, and I think he's had an unbelievable season," James said. "I think it's very well deserved. And it's always great that another kid born in Akron, Ohio, can win an MVP too, so, I like that."

Curry received the award during an afternoon news conference Monday in Oakland. He will be presented with the hardware again during an on-court ceremony when Golden State hosts the Memphis Grizzliesin Game 2 of the Western Conference semifinal series Tuesday night.

He is the franchise's first MVP since Wilt Chamberlain in 1960, when the Warriors played in Philadelphia.

The MVP trophy caps a very successful awards season for the Warriors. Bob Myers was voted NBA Executive of the Year, Steve Kerr was runner-up to Atlanta's Mike Budenholzerfor coach of the year and Draymond Green -- despite getting more first-place votes -- finished second to San Antonio's Kawhi Leonard for defensive player of the year.

Curry, who had 22 points and seven assists in the Warriors' 101-86 victory over the Grizzlies on Sunday, has overcome obstacles at every level.

He grew up in the shadow of his father, former NBA player Dell Curry. Most major colleges didn't offer him a scholarship coming out of high school in Charlotte, North Carolina, believing he was too small. And some professional scouts wondered whether his game could transition to the NBA, where point guards are bigger and defenses are tougher.

Instead, Curry has gone from a shooting guard who dazzled at Davidson during the NCAA tournament to a polished professional point guard who can shoot, dribble and distribute with the best of them. In a game dominated by big men and played by some of the world's greatest athletes, the 6-foot-3, 190-pound Curry controls the flow without physically overpowering defenders.

But there were times when it seemed Curry's potential might not be reached. Two operations on his right ankle in his first three seasons with Golden State fueled questions about his durability. He even had to prove his worth to the team that drafted him seventh overall in 2009.

"A lot of people thought I had it easy with pops playing in the NBA," Curry said, shaking his head when talking about his past.

Curry signed a $44 million, four-year contract extension with the Warriors before the 2012-13 season. Back then, the deal looked like a major risk for the Warriors considering Curry's injury history.

"I remember thinking that day, 'This can't be how his career goes. This isn't how it's supposed to be," Myers said of hearing results of Curry's ankle injury. "And then I fast forward in my own mind to today and I sit here sharing a stage with him thinking, 'This is how it's supposed to be for Steph. This is the conclusion of four years of work and effort.' "

Now? Well, Curry is clearly one of basketball's best bargains.

Curry averaged 23.8 points, 7.7 assists, 4.3 rebounds and two steals this season. He shot 48.7 percent from the floor and 44.3 percent from 3-point range.He already owns three of the five most prolific 3-point shooting seasons in NBA history.

Off the floor, his popularity is also soaring.

Curry received more All-Star votes than any player and joined James and NBA commissioner Adam Silver at the league's biggest marketing events during All-Star Weekend in New York, where his face was plastered on posters in subway stations and televisions in taxi cabs. He also delivered by winning his first 3-point contest.

With the revitalized Warriors winning at a historic pace, Curry's case for MVP echoed around the league as loud as the nightly chants at Oracle Arena.

Marc Stein, Calvin Watkins and Dave McMenamin of ESPN.com and The Associated Press contributed to this report.

Curry named NBA MVP
Stephen Curry discusses winning the NBA MVP award and how his family helped him get to this level.