Warriors not just winning, they're demoralizing the opposition

ESPN
By Brian Windhorst
MINNEAPOLIS -- In a league where even the best teams lose dozens of times a season, an individual regular season loss or two isn't the worst experience. No, there is something lower: being demoralized.

That's the trade Stephen Curry is plying right now. He and the Golden State Warriors demoralize their opponents. They give losses with a jagged asterisk. They linger.

There were many moments that personified it in the Warriors' 129-116 win over the Minnesota Timberwolves on Thursday en route to their franchise-record 10th straight victory to start a season. But one stood out.

As the Wolves scrapped and failed in the second half to keep close, 39-year-old Andre Miller was required to guard Curry. This is patently an unfair fight and a curious decision by Wolves coach Sam Mitchell, whose hand was forced when Ricky Rubio missed the game with a hamstring injury.

With fill-in starter Zach LaVine on the bench -- he already had been sufficiently vanquished, as Curry scored most of his 21 first-quarter points at LaVine's expense -- Mitchell was down to Miller or 19-year-old Tyus Jones. So Miller it was.

Miller got down in his stance. Curry tried to cross him over, as he'd done many times on the night, and Miller guessed correctly and reached in and batted the ball away. Curry had to chase it down at halfcourt, then re-engaged Miller. Once again, Miller -- low to the ground, with his eyes analyzing each move -- guessed correctly and blocked Curry's attempt to drive. The shot clock was running out; Miller had done his job admirably.

In a flash, however, Curry rocked backward and unleashed the ball. Miller left his hand in the air as evidence he challenged the shot but just watched as the 26-footer swished. Curry was already gone back down the court when it did, mouthpiece wagging and a single finger in the air.

It is for these moments that another Wolves veteran, Kevin Garnett, paid Curry a great compliment.

"Like Michael Jordan was a whole other thing, this guy is his own thing," Garnett said. "It's beautiful for basketball."

Curry dropped 46 points on Thursday, hitting eight 3-pointers. Draymond Green had 23 points and 12 assists as he repeatedly embarrassed the Wolves when they dared to be a step slow on a rotation or a bit too eager to stick to Curry. In the first half alone, Green threw four perfectly placed lobs for dunks and two other times hit teammates for 3-pointers when the Wolves cheated to the rim to take away the lob. Demoralizing squared.

Just like what the Warriors did to the Memphis Grizzlies. After beating them by 16 points on Wednesday in Memphis, Golden State now owns two wins by a combined 66 points over Memphis in just the last two weeks.

This is a concept that was relevant on Thursday. It marked the five-year anniversary of Joe Lacob and Peter Guber buying the Warriors. They were the pair that surprisingly outbid superbillionaire Larry Ellison for a then-record $450 million. They bought a team that had been to the playoffs once in 16 seasons, had a single playoff series win in 20 years and had played in a dilapidated, if often boisterous, arena.

After the papers were signed, the Warriors promptly lost 13 of the first 15 games under the new ownership. Talk about demoralizing.

"Those were some dark days back in 2010," said Curry, looking back. "We had some rough years."

Lacob, who acts as the team's CEO, now is on a massive winning streak, of course. He has hit home run after home run, making a slew of perfect hires who have made great decisions that have led to a cascading effect of incredible results. Not only do the Warriors have the best team in the league, but they run some of the best business. They didn't just raise a banner in October, they closed a $155 million land buy in San Francisco, where they will build a waterfront arena with all private money.

The fans in Minnesota feel a pang whenever they see Curry up close, knowing he was chosen seventh in the 2009 draft and the Wolves had picks No. 5 and No. 6 and infamously took two point guards not named Curry.

What they probably didn't realize is the other four starters where all draft picks made in these last five years, all of them jackpot moves from general manager and Lacob hire Bob Myers.

"They invested to make this, well a championship organization now, but a first-class organization," Curry said. "I feel very fortunate to be on this side of the equation as opposed to what it was five years ago."

The bad memories have gone into the fog; Curry is the only remaining player, and he's not looking back. The way things are going, why would he?

"This is definitely a great way to start the season," Curry deadpanned. "The best start we could have, obviously." 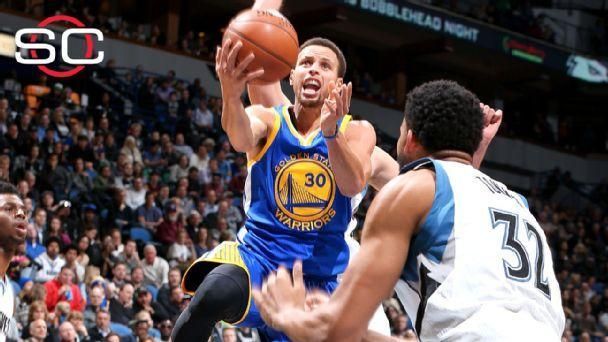