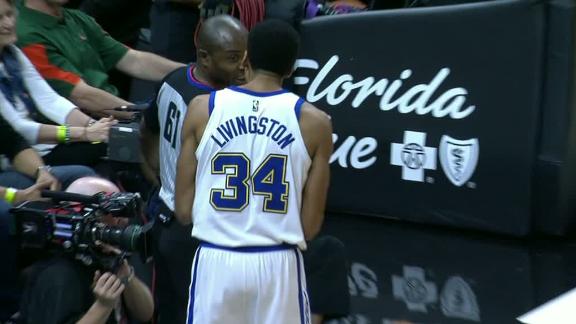 MIAMI -- Golden State Warriors backup point guard Shaun Livingston was ejected midway through the second quarter of Saturday night's 123-95 win over the Miami Heat for making contact with an official following a dispute of a non-call.

Livingston was hacked on the arm by Heat guard Tyler Johnson, and official Courtney Kirkland was right near the play, but no call was made. The 6-foot-7 guard, who is typically reserved and quiet, promptly confronted Kirkland. During the verbal exchange, their heads bumped, and Livingston was tossed from the game.

It was the first time in his 13-year NBA career that he was sent home early from a regular-season contest.

"It all happened really fast," said Stephen Curry, who recorded a game-high 30 points. "Obviously, him and Courtney had been talking about a separate play for a couple possessions. It was obviously an unfortunate situation. Shaun's a high-character guy. You don't see him in that position very often. I'm sure he wants to be out there with us and not let a missed call or a heated situation take him out the game. But we got his back."

"We know Shaun is not that type of player," Kevin Durant said after scoring 24 points and dishing out seven assists. "He's a pro that's been in the league for so long and just plays the game and doesn't really say much. So you could tell that things were a little heated right there. We felt like he should have got two shots after that shot he took. It did look like from watching that Courtney stepped into his face, and he tossed him out."

In a statement explaining what occurred, Kirkland said: "The reason that Shaun Livingston was ejected was for making physical contact with me. It was only one technical foul, and he was ejected immediately. That's basically it."

"I don't know. I would say Dot [Livingston's nickname] was holding his ground," said David West, who tried to separate the two during the altercation. "Courtney's a mild-mannered ref. Dot's mild-mannered. I didn't expect it to get like that -- zero to 100."

Draymond Green didn't know what to make of it, either.

"Honestly, I don't know," he said. "I know he got fouled. I haven't saw the play. Courtney said he head-butted him or something, so I don't really know. I can't see the play, but I know there's something else to it. That's just not Dot."

The league will review the play to determine if further discipline is warranted. The veteran guard will likely learn his fate before the Warriors take on the New Orleans Pelicans on Monday, a game in which Livingston is scheduled to rest.

It was an unusual scene at American Airlines Arena, and it left players shocked.

"I just tried to get in between them, but the damage was already done," West said. "When I turned, I just saw that vain in Dot's neck, and I was like, 'Yo, he's really fired up.'"