Sources told ESPN that the Warriors contacted Turner officials to express concern about TNT's years-long McGee coverage on the "Shaqtin' a Fool" segment on the popular "Inside the NBA" show, with the team contending that the ongoing negative portrayal of the veteran center is doing unnecessary damage to McGee's reputation.

A Turner source confirmed the discussions with the Warriors and told ESPN that "the matter has been discussed internally" after a Twitter feud erupted Thursday night between O'Neal and McGee.

McGee's penchant for on-court gaffes in stints with the Wizards, Nuggets, 76ers, Mavericks and Warriors have been a mainstay of O'Neal's weekly "Shaqtin' a Fool" blooper reel. But the network took it a step further Thursday night when it aired a "Doctor Strange" piece devoted exclusively to McGee bloopers.

That prompted a nasty exchange of tweets Thursday night between McGee and O'Neal in which McGee told the Hall of Famer to stop talking about him in explicit fashion, followed by O'Neal threatening to "smack the s**t out yo bum ass."

While McGee wasn't available after Warriors practice Friday, both teammate Kevin Durant and coach Steve Kerr -- who worked as a TNT broadcaster before taking the Golden State job -- came to McGee's defense.

"He works extremely hard," Durant said Friday. "He's come in here and done so much for us as a player. He only wants to be respected, just like anybody else.

"I understand that Shaq works for a company that wants him to do that type of stuff and make fun of players ... but when you just keep doing it time and time and time again, for no reason, and the guy actually disagrees with you and you threaten him ... I didn't know cops could threaten civilians like that."

Durant was referring to O'Neal's status as a reserve police officer in South Florida.

"It's definitely childish," Durant said. "But that's what they want from these stars and these retired players ... to feud with the guys playing now. If I was JaVale, I'd feel the same way. It's childish."

Said Kerr: "JaVale has been fantastic for us, as a player, a teammate, fantastic guy. He's funny, he's fun to be around, he does his job. He's a total pro.

"I don't blame him for being frustrated. Shaq's been picking on him for years and years and years. I think JaVale, and rightfully so, I feel like he's frustrated. It's like, 'It never ends.' It's one thing to just have a little fun, but I think you can go a little bit over the top."

Kerr acknowledged being influenced by the TNT segments.

"You think about JaVale's career. When you're in this position, where somebody on national TV is making fun of you night after night after night, it's not the greatest thing for your reputation. I can tell you I had a preconceived notion of JaVale before he got here that turned out to be totally false. And a lot of that was because of what goes on with Shaq's 'Shaqtin' a Fool.'"

"Shaq was a s---ty free throw shooter. He missed dunks. He airballed free throws. He couldn't shoot outside the paint," Durant said. "He's bigger than everybody. He didn't have any skill, but he was bigger and stronger than everybody. And he's still a great player, but you had your flaws too as a player. And he played on five or six teams too, so it's not like he was just like this perfect center. You had your flaws, too."

O'Neal replied to Durant via Twitter on Friday night.

Earlier this month, the NBA had sent a memo to teams, which wasobtained by ESPN, cautioning against "mocking and/or ridiculing" of opponents or officials by official team social media accounts. In the memo, the league warned that "the inappropriate use of social media can damage the reputation of the NBA, its teams and its players."

Information from ESPN's Ethan Sherwood Strauss and Tim MacMahon contributed to this report. 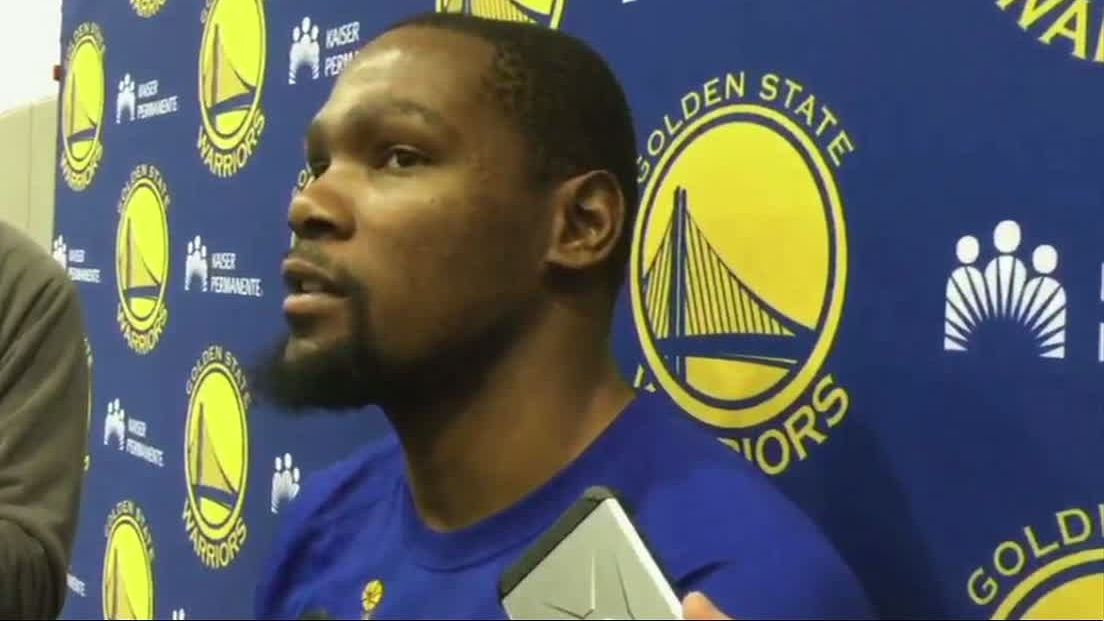