Warriors' 'Strength in Numbers' gives way to 'Faith in Youngsters' 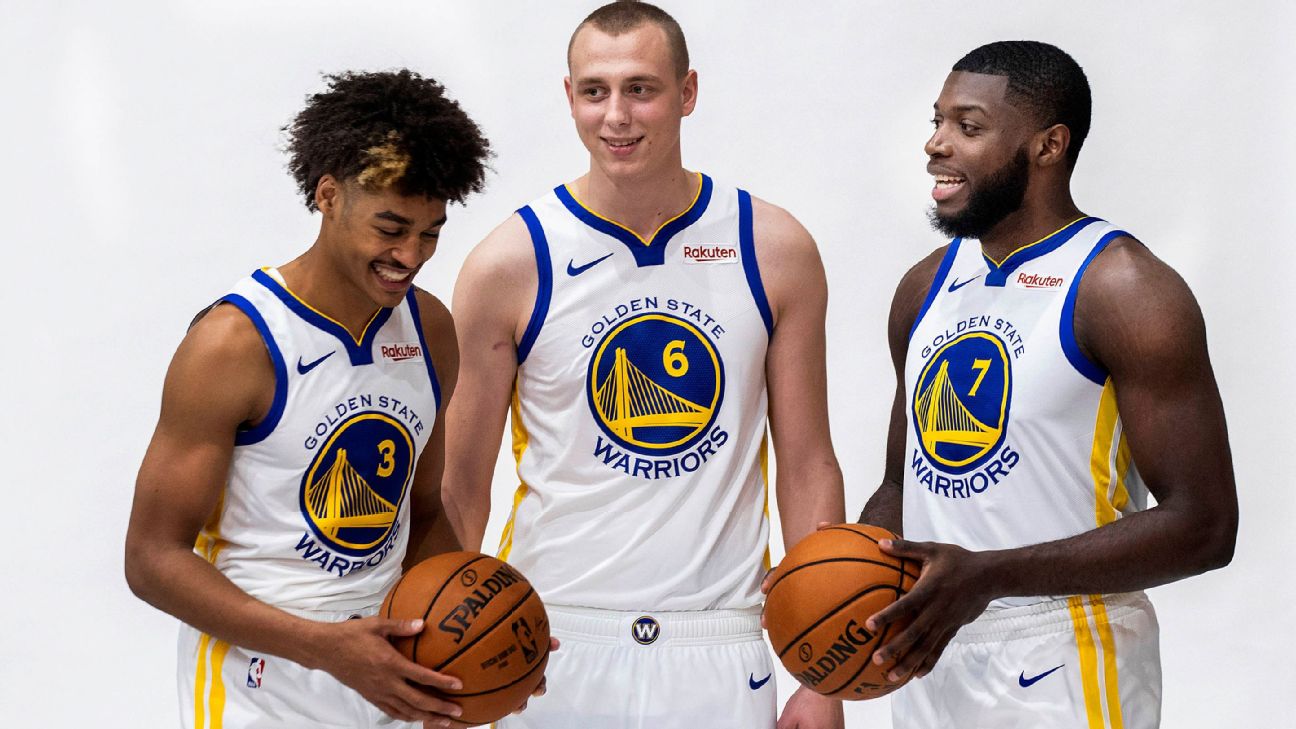 OAKLAND, Calif. -- For the past five years, the Golden State Warriors have lived by one mantra: "Strength in Numbers." Yes, they had more talent at the top than any other team in the NBA, but at critical moments throughout their five consecutive trips to the NBA Finals, they knew they could count on their deep, veteran-laden bench to support their superstars.

But the Warriors underwent a dramatic transformation this summer. Gone were not only All-NBA-level startersKevin Durant and DeMarcus Cousins, but also key reservesAndre Iguodala and Shaun Livingston. The Warriors' newfound underdog status meant they were no longer a destination for veterans willing to take a pay cut to chase a near-guaranteed ring. That meant replacing their vaunted depth with rookies and young, unproven players, leaving them with a new mantra: "Faith in Youngsters."

"We went from one of the oldest teams in the league to one of the youngest," Warriors assistant general manager Kirk Lacob said. "All of a sudden you look at it andSteph [Curry]is the oldest player on the whole team. Klay [Thompson]and Draymond [Green]arethe elder statesmen. I think Alfonzo McKinnie (26) may be our fourth-oldest player by age. He's only had a couple years of NBA experience."

McKinnie is actually the fifth-oldest Warrior, behind Golden State's star trio and the recently added Alec Burks, but Lacob isn't overselling the shift in the Warriors' roster structure. According to ESPN Stats & Information, the Warriors' average age in the 2018-19 season was 28.4, ranking third oldest in the NBA. Now they have the eighth-youngest roster.

The change in experience was borne out of necessity. Because Durant's decision to go to the Brooklyn Nets led to the sign-and-trade deal for 23-year-old Nets guardD'Angelo Russell, Lacob, GM Bob Myers and the rest of the Warriors' front office had to clear out Iguodala and Livingston, veteran stalwarts on all five Finals teams, to get under the CBA-mandated hard cap for teams who execute sign-and-trade deals.

Once the dust settled, the Warriors' roster looked like a shell of its once veteran-influenced self. The group has eight new players, including three rookies in Jordan Poole, Eric Paschall and Alen Smailagic who will be fighting for playing time in training camp. You have to go back to 2013-14, the last season before Steve Kerr arrived as Warriors coach, to find a Golden State roster with three rookies on it.

During their championship run, the Warriors clearly did not prioritize any kind of youth movement. From 2013 to 2018, Golden State made a total of three picks in the NBA draft: Kevon Looney in 2015, Damian Jones in 2016 and Jacob Evans in 2018. They also purchased the second-round picks used to acquire Patrick McCaw and Jordan Bell. However, only Looney and Evans are still on the team.

"The draft is tricky because it's not just about how talented the player is -- it's about where are they going, what life cycle is that team on," Lacob said.

Lacob cited Bell and McCaw in particular as players who excelled in limited roles as rookies but struggled in their second seasons when they failed to receive an expanded role. When a team's goal is winning titles, there's little margin for the kinds of errors that young players make.

"I had a conversation with Draymond about this right after our season. He said, 'I would not be the player I was today if I had come onto this Warriors team three years ago,'" Lacob said. "He's like 'When I got here, we were a completely different team. I was given a chance, and I failed a lot.' And he's like, 'I sucked my first year. My second year I was OK. My third year I got an opportunity. That's hard for young guys who aren't being given that opportunity because we got guys who have been here a long time and have established roles. There's just no opportunity for growth.'"

To Green's point, Evans, who was selected with the 28th overall pick a year ago, played in only 30 games as a rookie, and a total of 18 minutes in the Warriors' postseason run. And while they don't expect him to immediately step in this season and replace the production of the since departed backup point guard Livingston, they do believe he can eventually develop in that kind of role.

"Before, we wouldn't put a player into a new role, like a Jacob Evans," Lacob said. "Maybe he becomes a point guard, maybe he doesn't, but the ability to go every single day and work on that and then [have] the freedom to try that in a game gives you a chance to grow."

"There just wasn't time, and for a lot of those players it didn't make sense," Lacob added. "Now we have an opportunity. ... It's really about spreading these guys' wings and letting them fly a little bit and not being as worried about the day-to-day results. You kind of got to fail to succeed in the NBA. Trial by fire. And we finally have a chance to do that."

To help do that, Kerr has reshuffled his coaching staff, elevating Chris DeMarco into the lead player development position. Joining him will be Aaron Miles, who served as the head coach of the Warriors G League team in Santa Cruz. There, he worked closely with Smailagic, who played in the G League as an 18-year-old before being drafted in the second round in June.

"For Steve, it will be a lot of teaching," Myers said. "Before, he had a lot of guys that had operated in his system. But it will be teaching, and I think he'll embrace that too and a lot of learning, a lot of youth. We're going to have more highs and lows probably as far as winning and losing than we've had before. But he seems to be invigorated."

Myers is hopeful Kerr's upcoming term on the USA basketball staff alongside his longtime friend and confidante Gregg Popovich will not only give the Warriors coach a renewed sense of energy but an opportunity to learn from Popovich. The two future Hall of Fame coaches will be able to share their wisdom during this summer's World Cup in China and next summer's Olympic Games in Tokyo, and as the Warriors continue a collective metamorphosis, the group is hopeful that Kerr will find a way to emulate the model that has made the Spurs so successful.

"One thing Popovich is so great at is, he's been so successful at changing his style," Myers said. "You've seen the Spurs evolve and play a certain way and then shift with their personnel."

The Spurs have been held up throughout the league as the prime example of what the Warriors are trying to do: develop and integrate new, young players while maintaining a proven level of success. One of the reasons for San Antonio's sustained success is that the team has consistently and repeatedly drafted well at the back end of the first and second rounds. Dejounte Murray, taken with the 29th pick in 2016, is already an all-defensive team selection, and when he missed last season because of an injury, he was ably replaced byDerrick White, the 29th pick in 2017.

Meanwhile,Damian Jones, who was taken one pick after Murray in 2016, played in only 49 games in three seasons in Oakland, and was traded to the Atlanta Hawks earlier this month.

"We have immense respect for what the Spurs have done and have been able to outlast everyone and be great for 20 years, and so there's certainly very strong elements," Lacob said. "I think their player-development pipeline is incredible. You look at all the young players and a lot of them [are] later draft picks, which are, percentage-wise, statistically hard to hit on. They do a really good job of allowing people to become NBA players and that is extremely valuable."

The Warriors did hit on Looney, the No. 30 pick in the 2015 draft. His role has increased each season he has been in the league -- going from 4.2 minutes per game in five games as a rookie to 18.5 minutes in 80 games last season -- and during the flurry of moves the team made after Durant's departure, they prioritized re-signing him to a three-year, $15 million deal. The team is hopeful it can find similar success with its trio of rookies this season.

Myers set the tone for the three players at their introductory news conference last month, telling them they "haven't done anything yet." But he also reminded them that if they put in the work, they can be successful.

For Poole, who played against Looney in high school in the Milwaukee area, it was a reminder of the type of team he's joining.

"It's a really good culture," Poole said. "Eric came from Villanova, I came from Michigan, so we're really familiar with good culture. I was going through a couple emails and it's 'family, family, family.' Of course, talent is going to take you a long way on the court, but being able to have the chemistry on and off the court with so many great guys ... it's amazing."

The good news for the Warriors is that they still have Curry, Thompson and Green to be the focal points of that culture (although Thompson probably will be out most of next season as he heals from an ACL injury). The trio of players takes a great deal of pride in what they have accomplished together, but the organization knows that it's time for each of the three to take on more leadership responsibility this season.

"It's funny that they're the elder statesmen," Lacob said. "They've been the center of attention for five years on the court, but we've had these great, great vets that helped them grow as people and as players in Shaun [Livingston] and Andre [Iguodala] and David West and Zaza [Pachulia], all these sorts of guys over the years. And they're gone, but this is an opportunity for those guys to step into that role.

"Because at some point in five years or six years they're going to be potentially Shaun and Andre. Maybe there's a new slew of young guys that are playing 36 minutes and these guys are being more careful about their minutes and saving themselves up a little bit and having this old, sage advice -- but it's a great opportunity for those guys. You really don't know what a person's going to end up like until you put them through something like this, so we're going to learn a lot about everybody." 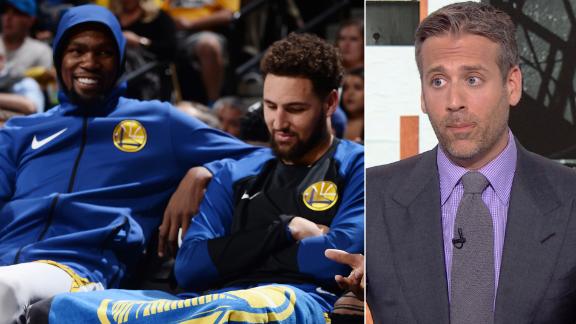