Wes Welker 'excited' to be back 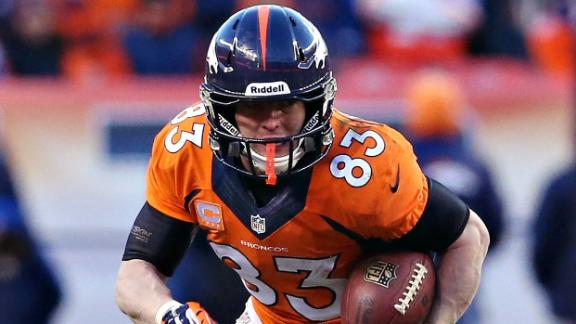 Welker, who was formally re-instated Wednesday morning as a result of the NFL's new policy on performance enhancing drugs, attended team meetings after getting a call from Broncos officials he was cleared to return to the building and then participated in Wednesday's practice.

Welker was originally suspended four games for violating the league's policy on performance-enhancing drugs and already served the first two games of the suspension, missing the Broncos' wins over the Indianapolis Colts and Kansas City Chiefs. The Broncos had kept a roster spot open for Welker for over a week in the belief the new drug policy would be enacted.

The Broncos cut wide receiver Nathan Palmer on Sept. 9 and remained at 52 players since. Asked what he had done during his suspension, Welker made it clear his mind was being read for his return.

"Working out, doing honey-do chores, not very well, [but] just working out and staying [in Denver],'' Welker said. "It seemed like every other day, I was kind of going back and forth about whether I was coming back or not.''

Asked if he believed he would play Sunday against the Seattle Seahawks, Welker wasn't quite ready to commit to that though most with the team expect to see him in uniform and lined up in the offense in CenturyLink Field.

Wednesday was Welker's first appearance on the practice field since Labor Day, when he was only a limited participant under the guidelines of the league's concussion protocol. Welker, who suffered a concussion in the Broncos' Aug. 23 preseason game against the Houston Texans, said he had been cleared medically "in the last week or so,'' and took part fully in what was a fully padded practice for the Broncos on Wednesday.

"Good to have Wes back,'' quarterback Peyton Manning said. "Guys were excited when he walked in the offensive meeting this morning ... I know he's been excited to get back out here.''

"It's always good when you have a guy who has been one of your leaders back in the huddle,"tight end Julius Thomas said.

Welker, who was initially critical of the league's drug testing policy following his suspension, said he was in contact throughout his time with NFL Players Association officials as negotiations we're ongoing on the new policy. Welker had vowed at the time to challenge the old policy.

Welker's chance at reinstatement came because, under the new policy, Welker's positive test for amphetamines would now fall under the league's policy for substance abuse because it occurred during the offseason. Under the guidelines of the substance abuse policy, a player enters the treatment program with the first positive test, a program that includes meeting with counselors; the player is also subject to increased testing each month.

But asked if he had followed through on his statements to challenge the old policy, Welker said:

"Absolutely, I've had a lot of time on my hands. I said it was flawed, you know, and we got it fixed. That just kind of goes to show it was flawed and it's fixed now. We've moved on from it.''

Welker said some of the important changes in the new policy were the addition of a neutral arbitrator to decide punishment as well as the rules regarding testing in the offseason.

Under his original suspension, Welker would not have been eligible to return to the team until Monday, Oct. 6, and then would have played for the first time in the Oct. 12 game against the New York Jets.