When the lights go down in the town: Warriors might have seen Oracle for last time 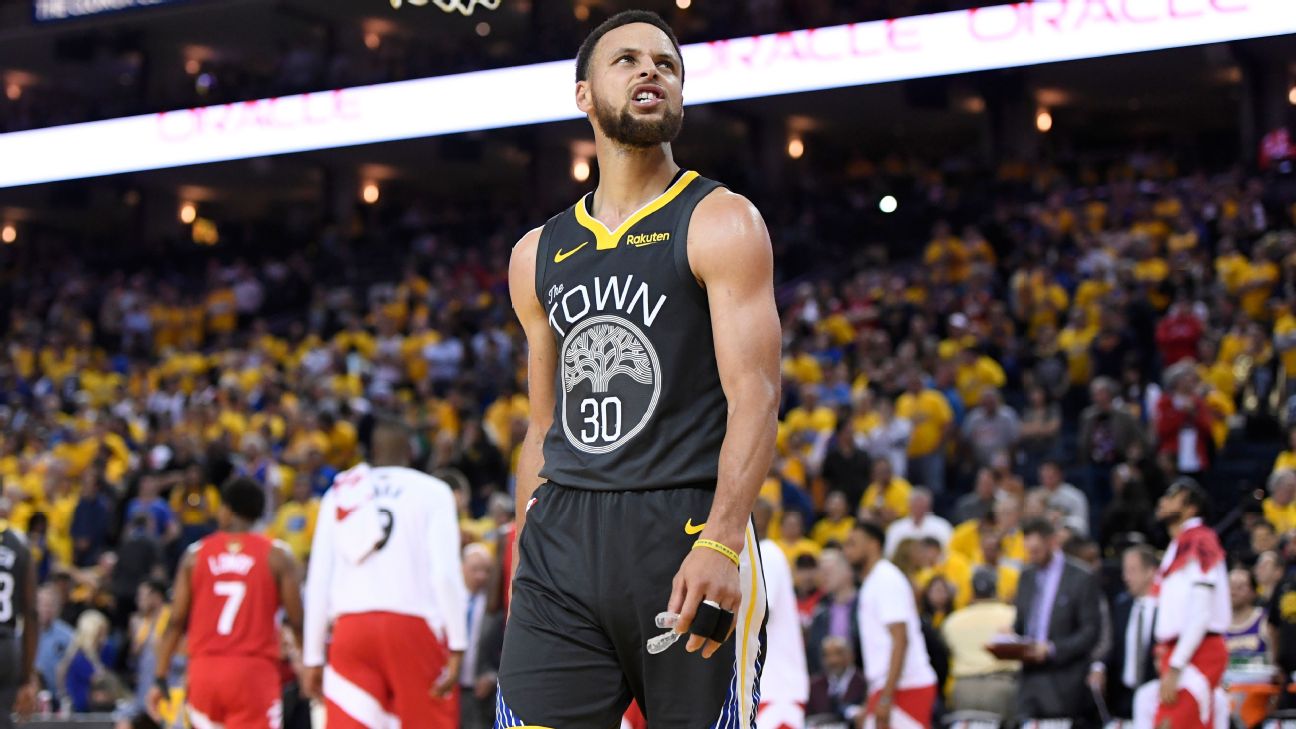 OAKLAND, Calif. -- The Golden State Warriors were down 15 late in the fourth quarter, and the sounds from the Oracle Arena crowd were edging from disbelief to silence. Stephen Curry, Klay Thompson and Andre Iguodala were bent at the waist, gassed, clutching their shorts for ballast. Steve Kerr sat on the bench, hands threaded, looking like a man who was out of ideas. You didn't even need the scoreboard; the body language told you everything.

When the Toronto Raptors took a two games to one lead in the NBA Finals with a Game 3 win at Oracle, the Warriors reacted with a shrugging defiance. They were a compromised team about to get closer to whole. They were champions. They had overcome worse situations against better teams -- none of this was a big deal.

But after the Raptors won Friday's Game 4 -- convincingly, 105-92 -- to take a 3-1 series lead, the defiance evaporated, replaced by a grudging acknowledgment. For the Warriors to win their third straight title, it's going to take something spectacular -- and something they have shown no signs of possessing.

It has been a balky and theme-less series, but in Game 4, something happened that would have seemed unfathomable two weeks ago. The Warriors, up by four at halftime, were outscored by 16 points in the third quarter. The Raptors pressured them on defense, double-teamed Curry and attacked on offense, getting open shots and easy pick-and-roll baskets.

In short, the Raptors out-Warriored the Warriors.

"The third quarter got away from us," Shaun Livingston said. "But I think in the first half -- first quarter especially -- we had a couple of stretches where we didn't capitalize, and they were always in striking distance. That's dangerous when you're playing a team with that kind of firepower. They got hot in the third quarter, and it got away from us."

This has been the leaguewide refrain since the Warriors won their first title five years ago. Every team in the league has felt the blast-furnace rush of a Golden State run and been powerless to stop it. No timeout, no play call, no defensive adjustment proved to be a reliable deterrent. And now here the Warriors are, one game from elimination, sounding as if they're playing against a former version of themselves.

"They found a rhythm," Draymond Green said, "and once a team like that finds a rhythm, it's hard to get them out of it."

The night started with such promise. Thompson, whose presence represented the physical manifestation of the Warriors' hopes, took the court a little more than 50 minutes before the game. The Oracle Arena crowd, desperate to carry the final days of the arena to their latest possible conclusion, cheered wildly when he came out of the tunnel and again nine minutes later when he raised his arms and went back to the locker room.

After missing Game 3 because of a hamstring strain, Thompson scored 28 points on 11-of-18 shooting in a remarkable 42 minutes. Backup center Kevon Looney was back too -- somehow -- after missing Game 3 because of a broken bone near his right collarbone that was previously diagnosed as season-ending. Although he was struggling by the end, Looney scored 10 points and had six rebounds in an inspiring 20 minutes. But Kevin Durant, whose return is eternally pending, was once again watching the game from the locker room, his calf injury still not deemed fit for duty.

Durant's situation remains perplexing, with Kerr admitting before the game that the medical updates and prognostications have "gone haywire." The prospect of his return was viewed as the fastest and surest way for the Warriors to even -- and then win -- the series, and the pregame buildup had led to the expectation that Game 4 would be his logical return. His absence, and a future looking murkier by the day, instead added another layer of resignation.

"There's been hope that he will come back the whole series," Green said. "Obviously, we hope to have him, but we'll see what happens. ... His body will tell him if he can get out there or not. And if he can, great. And if not, you still got to try to find a way to win the next game."

Through four games, the Raptors have shown remarkable resilience. And so this never felt like typical Warriors dominance -- not even when Golden State built an 11-point first-quarter lead with every Raptor but Kawhi Leonard missing shots. During a particularly heinous stretch late in the first quarter, coach Nick Nurse called a timeout, surging from the bench as if he just might leave the building. Nurse -- the master of angst, the maestro of the dropped head and the slumped shoulders -- got about eight steps toward the tunnel before reconsidering. He turned as if heeding the call of a drill sergeant and began clapping his hands as if he'd come to the sudden realization that everything was going to be all right. Leonard, probably the least loquacious man in the building, put it this way: "Have faith, and not put our head down."

The tightened focus of the Finals creates a constant gush of speculation: who's up and who's down, the indispensable and the disposable. It has been an uneven series, and there are so many fascinating figures:

Kerr was asked where the Warriors go from here, and he gave the only appropriate answer: "We go to Toronto, and we try to win a game."

This building might be finished -- and the Golden State dynasty along with it. The teams' identities have been switched like a clumsy plot twist. The Warriors are the team playing to keep the Raptors from running away with a massive lead. The Raptors are winning games with strong third-quarter offense and walking off the court like resolute pioneers determined to find the first title for franchise and country.

And somewhere, amid the maze of the arena's underbelly, Durant watches, his absence every bit as powerful as his presence. We're always eager to let what happens next determine the meaning of what happened before, but it took four games for this series to develop a theme: Nobody really knows anything. 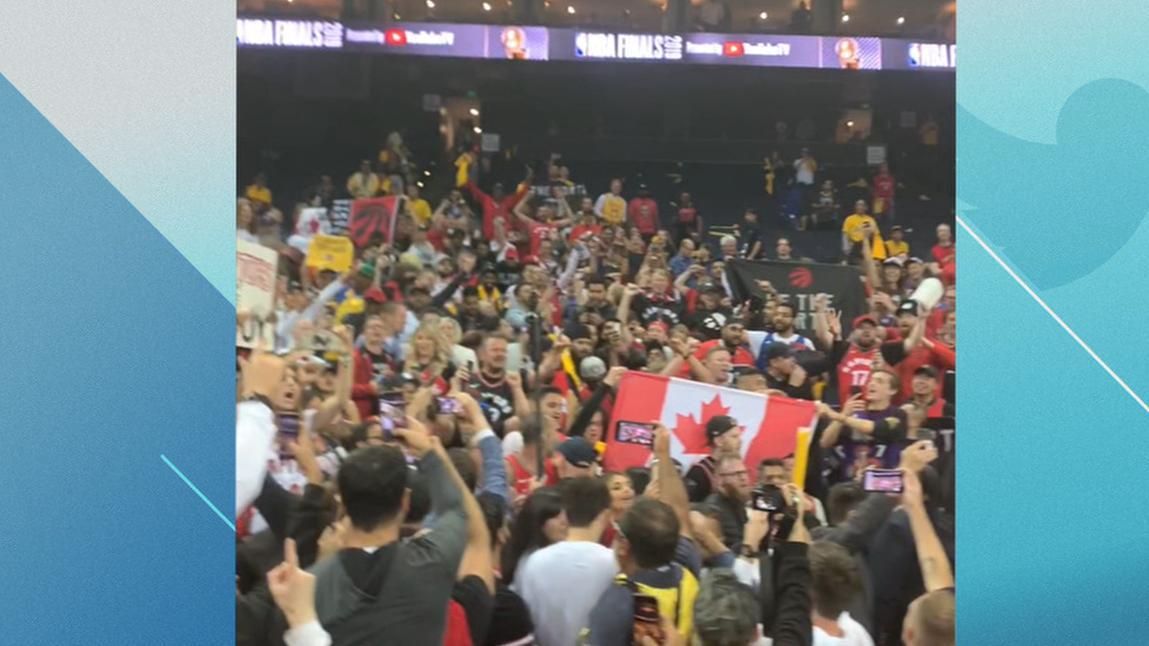 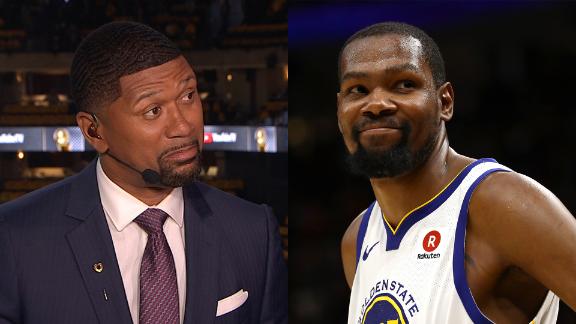