Which player had best sneakers of 2019 NBA conference semifinals? 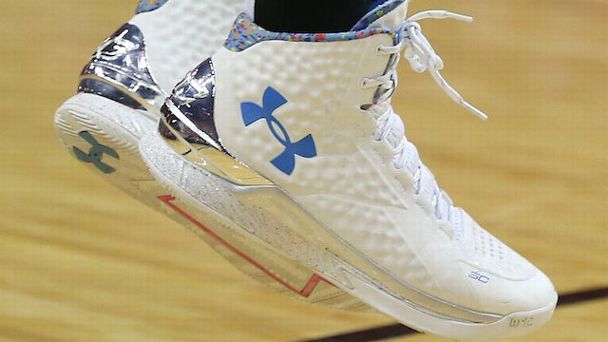 In many ways, the stage for Game 6 in Houston was set for the Golden State Warriors to hearken back to the starting points of their "Strength In Numbers" mantra-led run.

Not only was Andrew Bogut back in the starting lineup, but without Kevin Durant on hand, the all-hands-on-deck approach was needed more than ever to end theHouston Rockets' season for a second year in a row.

"It definitely was a little throwback for us, for sure,"Draymond Greensaid.

As the Warriors heard "a lot of noise" leading up to the potential close-out game in Houston, Stephen Curry took note of the narrative forming, that they'd be unable to advance without Durant as Curry was undeniably struggling throughout the series.

"I know what I'm capable of," he said. "I don't need any extra motivation. My confidence never wavers."

Even so, Curry decidedly looked to turn back the clock in advance of Game 6, digging through his sneaker stash and packing a 4-year-old pair of his very first Under Armour signature shoe, the Curry 1, for the trip.

In a cupcake sprinkles-themed "Birthday" colorway no less, he not only wore the shoes on his 27th birthday four seasons ago, but also during the 2015 NBA Finals -- the Warriors' only Finals win before Durant joined their dynastic run. He tallied a series-high 37 points during that momentum-shifting Game 5 win in the shoes.

"I wanted to lean into it," he said. "Obviously, without K, we've had a certain look and dynamic. I felt good in those shoes once upon a time, so I wanted to bring 'em back."

A higher cut than his current low-top Curry 6 sneaker, the Curry 1 also represented the initial apex of his career, when he racked up a flood of accomplishments in the model throughout the 2014-15 season. In addition to his first MVP award and first championship, Curry had once again advanced the mark for the league's 3-point field goal record, and led the league in All-Star votes for the first time, dethroning LeBron James.

The Curry 1 was instantly the fastest-selling Under Armour shoe in the company's history. His agent, Jeff Austin, renegotiated his initial five-year endorsement deal with the brand in the months after the 2015 Finals, locking in an exponentially more lucrative deal through 2024.

With all of his personal history in the shoe set to fuel him as Game 6 tipped off Friday evening, he went scoreless throughout the first half.

"I was pretty terrible," he said with a sigh.

The second half told a different story, as he poured in 33 points during the game's most pivotal moments.

"My family knows I'm real superstitious at times," Curry said. "If I have a bad half, most of the time, I might change shoes at halftime. I did feel like I gave myself an opportunity to prove that it was the right call to bring those out of the garage. It obviously worked out. Nice little flash from the past -- moving on to the next round."

The throwback shoes and throwback spirit of his game spoke to a larger theme of Curry's throughout the season, the team's last of a 47-year chapter in Oakland before next season's move to San Francisco. He has looked to highlight former Warriors greats with a variety of throwback jerseys for his arena entry outfits, and has celebrated a "10 In The Town" storyline at his downtown Oakland-based pop-up store with Under Armour for his decade with the franchise.

According to those close to him, Curry has recently been digging deep through his rows and rows of black Under Armour boxes, looking for additional pairs of his first sneaker to break out, reminding him of the biggest moments from his first MVP season.

"I love the pressure of trying to stay on top and using the confidence that becoming the MVP meant," he said.

While Damian Lillard has a different approach to pressure, the Oakland native will be looking forward to his lofty shot at the reigning champs, as he's helped to carry the Portland Trail Blazers to the Western Conference Finals for the first time since 2000.]

After a flurry of instant classic moments in the opening round of the playoffs,Damian Lillard's biggest game of the second round came just before Mother's Day, as he paid tribute to his mother, Gina, with a special edition pair of his latest Adidas sneakers during the Blazers' Game 6 win at home.

With the league's loosened color rules this season, Lillard looked to shake free of the team's tame black and red hues atop his shoes.

"I was excited about it," he said. "Being limited with the colors, I wasn't always able to wear [certain shoes] in a national TV game. [Adidas] would say, 'Well, do your pregame warm-up in this shoe, they'll take pictures of it and we'll post it.' Now, it's like, you really get in front of that audience."

That new approach changed Lillard's entire outlook on planning his sneakers for the season.

A mainstay at Blazers games, Lillard's outgoing mom is also often clad In Adidas tracksuits and her son's latest signature sneaker. Creating a new colorway in her honor was one of Lillard's first ideas for his fifth shoe. Last month, she debuted the shoe during an arena entry alongside her son.

"My mom always wants something to represent her. She ain't shy," he said with a laugh.

As he has risen through the ranks of the league during his seven-year career, perhaps never higher than after his opening-round, series-clinching shot to send the Oklahoma City Thunder home, that hasn't stopped his mom from fully claiming the new "Suga Gee" sneaker as her own.

"In Oakland, my mom is one of the most popular people out there," he jokes. "When people look at it, they're not going to look at it like, 'Oh, this is her son's shoe that he kind of dedicated to her.' They gonna be like, 'Gina got a shoe!' And she's gonna say, 'Yeah! That's my shoe.' It's pretty cool that she can have that moment."

After also wearing the Dame 5 model for most of the season, Denver Nuggets point guard Jamal Murray wouldn't dare wear Lillard's signature shoe against the Blazers, opting instead for a rotation of recent Adidas releases during the series.

Part of the brand's extensive "Heroes Among Us" collaborative pack with Marvel Comics, Murray donned the Nick Fury-themed colorway of Tracy McGrady's first Adidas sneaker, the TMac 1. With black patent leather and metallic silver accents throughout, the launch lined up with the comic franchise's recent "Avengers: Endgame" release, pairing the brand's players with superheroes from among the many Marvel series.

Elsewhere,Boston Celtics point guard Kyrie Irving had his own theatrical-themed sneaker, as his new Kyrie 5 model was styled in a black, yellow, red and blue colorway inspired by the 1990's TV show "Friends." During the 2015 NBA Finals, reporters noticed new ink along Irving's left wrist featuring the show's recognizable lettering.

"I mean what can I say lol I'm a fan of the show," Irving hilariously and plainly captioned on Instagram after the tattoo initially went viral.

The shoe has been in the works for years since, an official collaboration with the NBC network that incorporated the "Friends" lettering along the left heel tab, and a similarly styled K.Y.R.I.E. font type along the right shoe.

Philadelphia 76ers small forward Jimmy Butler had his own surprise prior pair in store for the playoffs, this one carrying more added meaning than his usual rotation of Air Jordan exclusives. Originally styled in bright pink for Breast Health Awareness Month, Butler's Air Jordan 32 Low from a season ago featured an added handwritten inscription in support of former Minnesota Timberwolves teammateTyus Jones' mother's ongoing bout with breast cancer.

"WE FIGHTING MAMA JONES," Butler wrote, along with a heart.

Though there isn't exactly a formal voting process in store for the 2018-19 "NBA Sneaker King," there's no disputing Houston power forwardPJ Tucker's footwear reign on yet another season, all of which means little to the 34-year-old who simply takes a childlike approach to his love for kicks.

"I never really cared, and I never wanted to be a champion of sneakers. I don't even know what that is," he said with a laugh. "Honestly, it's just something that's pretty cool to be thought of as."

Throughout Houston's second-round battle against Golden State, Tucker donned a variety of vintage and upcoming Nike Kobe 4 colorways, along with a batch of impossibly rare retro Jordans.

His longtime Nike endorsement deal is set to expire in October, meaning Tucker could re-sign and seek out more rare Swoosh heat, or surprise next season with a new brand's rotation in store.

With only four teams left in the NBA playoffs ahead, take a look at the best sneakers worn throughout the conference semifinals, and be sure to vote for your favorite pair in our poll below.