Which player had the best sneakers of Week 16 in the NBA? 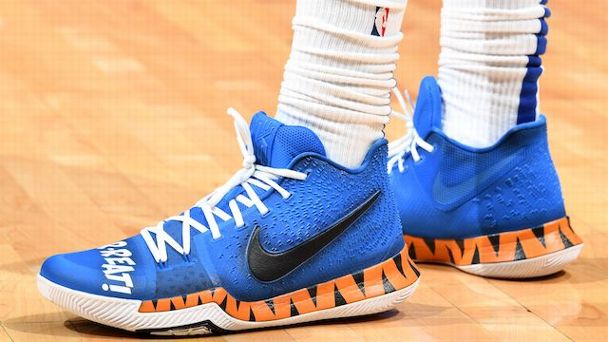 In recent seasons, custom hand-painted sneakers have taken the league by storm, with LA Clippers center Montrezl Harrell leading the way with some of the more inventive, playful and thought-out concepts.

"Everybody has something that draws to them, something they like to do," Harrell said. "Mine is shoes, and I like animation [and] cartoons."

Combining his love for art, cartoons and childhood memories, his latest series of painted pairs leans on a series of cereals for inspiration, each painted atop the Nike Kyrie 3 model.

Harrell has Reese's Puffs and Fruity Pebbles editions in store, and opted for a Frosted Flakes-informed custom earlier this week, complete with Tony The Tiger-influenced stripes along the midsole. The blue sneakers also feature the longtime character's "They're G-r-r-eat!" slogan along the toe.

Recently returned DeMarcus Cousins has been putting his new Puma shoe deal to use, instantly becoming one of the more recognizable names signed to the brand. The only All-Star among Puma's 10 athlete signings, he first debuted with the Golden State Warriors in a player exclusive edition of the Clyde Court model, instantly becoming one of the headliners of the brand after wearing Nike throughout his career.

"Being one of many at one company, and [now] being in a small elite group is a special feeling," Cousins said.

Although the four-time All-Star won't be lacing up his Pumas for this year's 68th annual league showcase in Charlotte, North Carolina, as he works his way back from injury, Cousins opted to give a first look at the brand's newest model during his pregame warm-up before the Warriors' win at home over the Los Angeles Lakerson Saturday. As the first to debut the Puma Uproar, the platform Cousins is enjoying with his newest team has helped to offer up more visibility during the brand's relaunch, as their younger players still continue to find their way in the league.

"I'm glad and I'm happy that I can be the guy to help put the brand at that level," he said.

Cousins has only added to a Golden State roster that boasts one of the most diverse lists of sneaker endorsers across the league, with Nike headliners in Kevin Durant and Draymond Green,Klay Thompson's unique deal with Chinese company Anta, and of course, Stephen Curry'srun with Under Armour.

All season long, Curry has looked to celebrate the franchise's final season in Oakland, with a "10 In The Town" campaign honoring his decade-long run with the Warriors. His latest colorway gives a nod to his rookie year uniform, with touches of chili orange and yellow accenting a navy base color. Of course, his rise through the ranks of the game has come a long way since that 2009 starting point.

"Lonely days," Curry says with a sigh. "We won like 23 games that year. It reminds you of where you come from. My rookie year, starting my journey here and not really knowing where it would lead to -- and now three championships, couple MVPs and what not -- it was very humble beginnings."

In tandem with the "Underrated" themed sneaker, Curry has also launched his own series of Underrated traveling basketball camps for high school players, with a twist. The camps are available only to fellow unheralded prospects, ranked three stars or lower, like Curry was in high school.

"It reminds you to appreciate the successes because of where you started from -- being underrated in terms of my journey through the ranks," he adds.

Elsewhere in the league, Houston Rockets power forward PJ Tucker hasn't slowed down all season, tracking down yet another Jordan exclusive only given to University of Oregon athletes. He has worn a school exclusive retro Jordan in every week of the season to date.

The black and vibrant green Ducks edition of the Air Jordan 6 features a subtle update to the longtime classic 1991 design, with the standard perforation pattern on the side of the shoe redesigned into the school's "O" logo. The color itself won Tucker over.

"That green pops!" he texted.

Washington Wizards power forward Jeff Green also showed off his own school spirit, debuting a player exclusive colorway ofRussell Westbrook'slatest Jordan signature sneaker made for Green's former school, the Georgetown Hoyas. In a more tame grey and navy look than the typically outlandish and colorful mashups that Westbrook has worn this season, Green is often known for still representing for his school, even a decade later.

Check out all of the best sneakers from around the NBA this week and vote for your favorite pair in our latest poll at the bottom. For real-time updates on the feet of the game's biggest stars, be sure to join our ESPN SneakerCenter Facebook Group.
Report a correction or typo
Related topics:
sportsespnmontrezl harrelldemarcus cousinsgolden state warriorsstephen currysneakersjeff greenhouston rocketsla clipperswashington wizardsnbapj tucker
Copyright © 2021 ESPN Internet Ventures. All rights reserved.
More Videos
From CNN Newsource affiliates
TOP STORIES