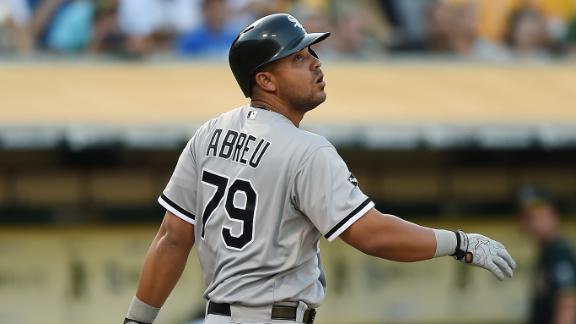 The White Sox announced that Abreu has been diagnosed with posterior tibia tendinitis in the ankle. Speedy outfielder Adam Eaton was activated from the disabled list in a corresponding move.

Abreu wore a protective shield on his ankle but was noticeably hampered by the injury during Saturday's loss to the Houston Astros.

After limping during an at-bat that ended with a fly out, Abreu was replaced in the seventh inning Saturday by veteran Paul Konerko.

Abreu, who signed a $68 million deal with the White Sox this past offseason, has 15 homers and leads the American League with 42 RBIs -- one behind Miami's Giancarlo Stanton for the most in the majors.

The Cuban slugger made history in April, becoming the first AL player to win both the league's Player of the Month and Rookie of the Month awards in his first month in the majors.

Eaton, who had been sidelined by a hamstring injury since May 3, is batting .276 with 14 RBIs and 20 runs scored this season. He returned to the lineup in his customary leadoff spot for Sunday's game in Houston.