Will the Sharks come back and win the Western Conference finals? 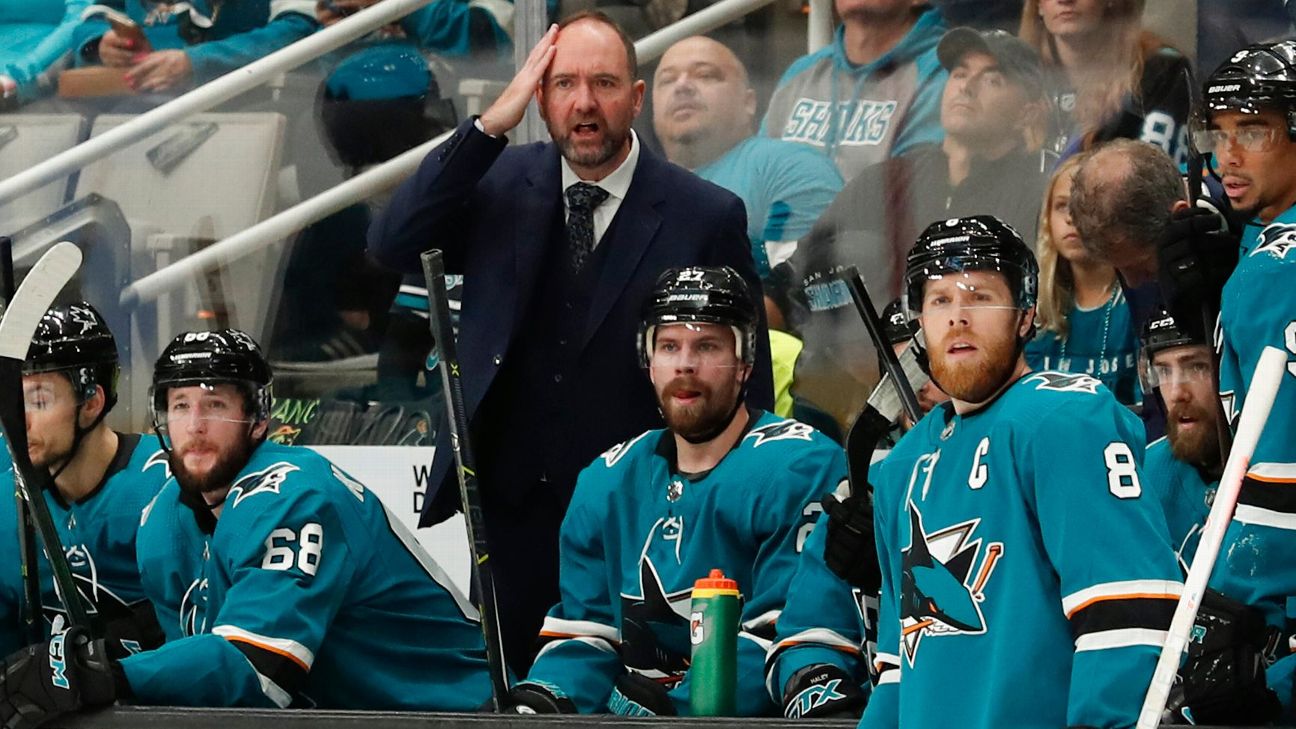 The San Jose Sharks are down 3-2 to the St. Louis Blues in the Western Conference finals. But they've come back from such a deficit before, as they engineered a comeback against the Vegas Golden Knights in the first round. Do they have another such run in them? Our experts debate.

Will the Sharks come back and win the series?

Greg Wyshynski, senior NHL writer: I'm about 80 percent on the St. Louis Blues closing out the series in six games, and about 20 percent on the Sharks rallying to win it. That 20 percent is based less on logic than on the fact that ... look, I've covered San Jose for three rounds. I've seen stuff you wouldn't believe. A rally from down three games to one. A phantom major penalty in a Game 7 and their power play scoring four times during the ensuing man advantage. An obscurely enforced offside play caught by a coach's challenge, taking away a goal in another Game 7. A blatant hand pass in an overtime before a game-winning goal in this series.

I've seen enough to consider there's something cosmic going on here. But I've also seen Erik Karlsson looking like he should be getting prepped for offseason groin surgery, and a Sharks offense that has gone drier than day-old toasted ravioli, with just one goal since Game 3. What the Blues took away from that game wasn't frustration with that blown hand pass call, but an acknowledgement that it should have never reached that moment via Logan Couture's 6-on-5 goal near the end of regulation. Game 5 was the culmination of that education, as the Blues never took their feet off the gas pedal in a 5-0 rout. That killer instinct -- the Blues are 4-0 in elimination games or games that forced one -- and Jordan Binnington's continued unflappability tell me to believe in the 80 percent ... while side-eyeing the 20 percent. Blues in six.

Emily Kaplan, national NHL reporter: I like the Blues to win this series, since they only need to win one of the next two. The Sharks are banged up, and Game 6 feels like it will be played without at least some of their hobbled stars, or some not playing at 100 percent (Peter DeBoer is playing coy on Erik Karlsson, Tomas Hertl and Joe Pavelski updates).

But say it goes to Game 7. St. Louis is the best road team in these playoffs, going 7-2 so far. The Blues' forecheck is stifling right now. They're getting production from all over -- 18 different players have scored -- while the top-end forwards such asVladimir Tarasenko and Jaden Schwartz are finding their stride. What's more, they have a locked-in, hot goaltender. Those are the same elements that helped guide the Bruins into the Stanley Cup Final, and I see St. Louis joining them there.

Chris Peters, NHL draft and prospects writer: There is only one way the Sharks can get back into this series, and that is Martin Jones playing out of his mind. As the Sharks' offense stagnates, it's almost entirely on Jones to at least give them a chance. However, if that's San Jose's hope, the odds don't seem to be in their favor. Jones has given up three or more goals in four of the five games so far this series, and hasn't had a level of consistency this season that gives one faith he'll find it now. Jones has a .902 save percentage in these playoffs, by far the lowest mark of his career, and a minus-8.51 goals saved above average. Even with those numbers, he's still a goalie who is capable of flashes of brilliance, and we've seen that at times this postseason.

This Sharks team has gotten some bounces and they've also been very good for stretches of this postseason, but they're losing the proverbial war of attrition here. You wonder if maybe their luck has finally run out. I believe the Sharks can come back, but only if Jones locks it down and San Jose's depth steps up in a major way. This team has thrived on emotion and have had their backs against the wall enough times this postseason that they will fight back. In the end, there is no rational reason to pick the Sharks, but how much of this postseason has been rational? I'll bite. Sharks in seven.

Dimitri Filipovic, hockey analytics writer: I'd love to play the role of devil's advocate here, because it's boring when we all agree about something. But after what we just witnessed over the weekend, it really feels like we can't in good conscience pretend that things are anything but bleak for the Sharks right now. It's not just that the Blues beat them by a decisive margin on the scoreboard, but it's the manner in which they did it that's awfully difficult to shake right now for anyone hoping that San Jose can turn this series around. Whereas St. Louis looked like a well-oiled machine that was firing on all cylinders, the Sharks were dropping like flies. That's ultimately why it's hard to talk yourself into picking them, because it's impossible to know what you're going to get from their best players.

At various points during Game 5, Hertl, Pavelski and Karlsson were all in the locker room tending to their ailments. Even if each of them do play in Game 6, it's fair to wonder what kind of shape they'll be in, and how much they'll have left in the tank to contribute. That's especially the case for Karlsson, who hasn't been able to properly finish back-to-back games now, and has looked like a shell of himself physically as he tries to fight through the injuries that have completely sapped him of his trademark mobility. Not only is he having trouble going back to retrieve pucks, but when he does get it, he's struggling with navigating the Blues' forecheck without that elusiveness.

For the Sharks to win this series, they need to beat St. Louis off the rush with their speed advantage, but without Karlsson being able to consistently transition the puck up the ice, they've been completely neutralized at 5-on-5. Health can often be the deciding factor this time of year, and the Blues certainly have the edge there at the moment. St. Louis wins this series.
Report a correction or typo
Related topics:
sportsespnst louis bluesnhlerik karlssonjoe thorntonjoe pavelskibrent burnslogan couturetomas hertlsan jose sharksmartin jonesevander kanetimo meier
Copyright © 2021 ESPN Internet Ventures. All rights reserved.
TOP STORIES
Suspect identified in fatal crash at SJ outdoor dining area, police say
Mass shooting on Austin's 6th Street: 14 hurt, suspects at large
Cal/OSHA proposes new workplace guidelines ahead of next week's vote
How Native Americans took over Alcatraz and ignited a movement
East Bay city offering reward money for reporting illegal fireworks
CA announces 'Vax for the Win' winners
5 years later, onePULSE Foundation working to affect real change
Show More
Poll: What do you think about California's reopening?
What to expect from CA's June 15 reopening
How to prepare for a wildfire evacuation
Grass fire burns nearly 100 acres, destroys structure near Travis AFB
1 dead, 2 injured after truck crashes into SJ outdoor dining area
More TOP STORIES News