Winston: Bucs should pick me No. 1 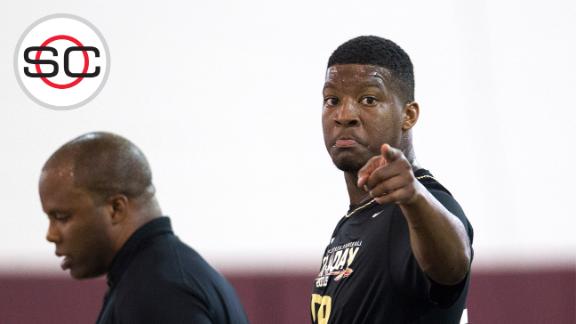 TALLAHASSEE, Fla. -- When asked why the Tampa Bay Buccaneers should make him the No. 1 overall pick in the draft, Jameis Winston didn't hesitate.

"Because I'm the best player in the draft," Winston said.

That comment came after Winston's pro day workout in front of a large group of NFL coaches, scouts and general managers at Florida State's indoor practice facility. Pittsburghhead coach Mike Tomlin and theSaints'Sean Payton were among the coaches in attendance.

But Tomlin and Payton probably won't get the chance to draft Winston. Tampa Bay was well-represented at the workout with coach Lovie Smith, general manager Jason Licht, offensive coordinator Dirk Koetter and quarterbacks coach Mike Bajakian among those in attendance.

They got a more extensive look at Winston than at most pro days. Winston threw 102 passes, completing all but 10 of them. Most pro days feature quarterbacks making 50 or 60 throws.

"He had a great day," Licht said. "He threw a full nine innings."

Winston, who was the only quarterback involved in the workout, said the extra throws were to allow all his receivers to show what they can do.

"I just want to compete," Winston said. "My job as a quarterback is to throw."

Winston took snaps under center and out of the shotgun formation and threw short, medium and long passes equally well. But the most unusual and impressive thing he did was just before his workout. Winston gathered all his receivers together and introduced them to the coaches, scouts and general managers.

Did Winston make a good impression?

There had been some speculative reports that Winston gained weight and was out of shape after last season ended. But Licht said Winston weighed in at 231 pounds, the same weight he was at the scouting combine.

"I think that puts a little bit of water on that, maybe puts that fire out," Licht said. "He showed his arm strength from Throw 1 to Throw 100 or whatever it was."

But the Bucs aren't ready to firmly say that Winston will be their pick. There still is work to do. The Bucs still will hold private workouts with Winston and Oregon's Marcus Mariota, Licht said.

"It's just part of the process," Licht said. "We're going to use every minute of time that we have here in the next few weeks to make a decision."

The Bucs aren't the only ones facing a big decision. Although it has been reported that Winston likely will not attend the draft in Chicago, he said he hasn't made a final decision. Winston said family reasons may be why he goes home to Alabama to watch the draft.

"My grandmother, she can't travel, she has Type 2 diabetes and has multiple surgeries and I want her to be there," Winston told NFL Network. "I want the people who I've been with Day 1 to be around me and enjoy this moment. It's a celebration to me and it's a once in a lifetime opportunity.

"We really haven't made that decision yet. There's been a lot of pressure on people trying to get me to come and make the draft."

Jameis Winston SportsCenter conversation
Jameis Winston sits down with Kaylee Hartung to discuss his pro day, how he deals with his critics and learning from past mistakes.

Will Bucs take Winston at No. 1?
ESPN NFL Nation Buccaneers writer Pat Yasinskas believes the Bucs will take Jameis Winston with the first pick in the NFL Draft.