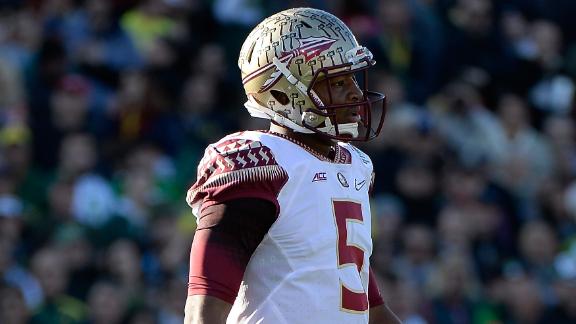 The woman who accused formerFlorida StatequarterbackJameis Winstonof raping her in December 2012 filed a civil lawsuit against him Thursday in a Florida state court in Orlando.


In the lawsuit, Kinsman's attorneys, David King of Orlando and Baine Kerr and John Clune of Boulder, Colorado, are demanding damages in excess of $15,000 and "the right to seek leave as to her entitlement to punitive damages." Her attorneys also demanded a jury trial.

According to the lawsuit, Winston's "conduct was extreme and outrageous and caused Plaintiff to suffer severe mental anguish and suffering, including, more specifically, loss of sleep, flashbacks, severe anxiety, fear of repeat sexual violence, an unfounded sense of shame and depression, all of which will continue to require psychological and other counseling."


"Erica hopes to show other survivors the strength and empowerment that can come from refusing to stay silent no matter what forces are against you," Clune said in a statement. "Jameis Winston in contrast has proven time and time again to be an entitled athlete who believes he can take what he wants. He took something here that he was not entitled to and he hurt someone. There are consequences for that behavior and since others have refused to hold him accountable, our client will."


"This stunt was expected. Ms. Kinsman's false accusations have already been exposed and rejected six times. This time will be no different," Cornwell said. "Mr. Winston welcomes the opportunity to clear his name with the truth. ... He will not permit this ploy to distract him as he begins the journey of fulfilling his lifelong dream of being a championship quarterback in the National Football League."


Winston, the 2013 Heisman Trophy winner who is expected to be among the first players chosen in this year's NFL draft, was never criminally charged in the alleged incident. State attorney Willie Meggs declined to charge Winston after investigating the alleged incident in November 2013, and former Florida Supreme Court Chief Justice Major Harding ruled in December that the evidence was insufficient to find Winston responsible for four violations of the university's student conduct code.


In the civil suit, Kinsman will be required to prove her case by a preponderance of the evidence, meaning a juror must believe her version of events more than Winston's. The burden of proof is lower than what is required in criminal court for a conviction, where the prosecution must prove the case "beyond a reasonable doubt."


According to the transcripts of the FSU disciplinary hearing, Winston and Kinsman provided starkly differing accounts of what occurred in December 2012. Winston says the sex was consensual. Kinsman, after being taken back to campus by Winston that night, went to a hospital, where a rape test was performed. Harding said in his judgment that he could not choose one version over the other.


"I do not find the credibility of one story substantially stronger than that of the other," Harding wrote. "Both have their own strengths and weaknesses."


Kinsman's attorneys also filed a federal lawsuit against the university in January. Kinsman alleged that she was subjected to a sexually hostile environment and that Florida State's "responses to the harassment were clearly unreasonable." In March, the school's board of trustees filed a motion to have the lawsuit dismissed.

Will lawsuit affect Winston's draft stock?
Phil Savage discusses whether the civil lawsuit filed against quarterback Jameis Winston by a woman who accused him of rape will change where he is selected in the NFL draft.