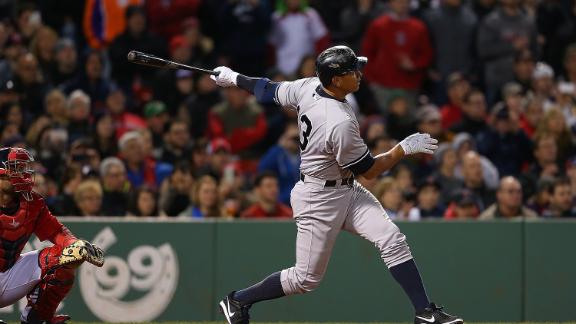 BOSTON -- Move over, Willie, and make room for Alex.

Alex Rodriguez, the New York Yankees' controversial designated hitter, joined Willie Mays in the 660 club Friday night at Fenway Park, and he did it in dramatic and timely fashion, lining a 3-0 pitch from Junichi Tazawa into the seats above the Green Monster in the eighth inning of the Yankees' 3-2 win.

"I hit that one good," Rodriguez said. "Anytime you're sandwiched between Willie Mays and Babe Ruth, it's special. This whole thing has been kinda like a dream."

"Congratulations to Alex Rodriguez on his 660th home run," Mays said in a statement. "Milestones in baseball are meant to be broken and I wish him continued success throughout his career."

Told of that statement, Rodriguez appeared emotional and said, "I love Willie. He's one of my heroes. I'm speechless."

Rodriguez's home run was a pinch-hit homer -- the first of his 21-year career -- that broke a 2-all tie between the Yankees andBoston Red Soxas the Fenway crowd, which had booed him lustily throughout the at-bat, lapsed into a stunned silence.

"I gotta tell you, I usually don't hear the difference, but that boo was pretty intense," he said. "It was pretty passionate. I have the utmost respect for the Red Sox, ownership, the fans, the players, but it was nice to do it and get a big win here."

Rodriguez, who did not start the game with right-handerJustin Mastersonon the mound for Boston, was told in the sixth inning to be ready to hit for Garrett Jones. As Rodriguez left for the cage to take some swings, he was stopped by bench coach Rob Thomson.

"I need one good swing from you, big guy, so get ready,'' Rodriguez said Thomson told him.

Rodriguez watched three pitches go by out of the strike zone and then uncoiled on a 94 mph fastball from Tazawa.

He slapped hands with his first- and third-base coaches as he circled the diamond and with on-deck hitter Stephen Drew after crossing the plate. His teammates stayed in the dugout. But when he arrived there, many of them, and manager Joe Girardi, high-fived him. Some enthusiastically slapped his back.

"I was hoping he would swing'' at the 3-0 pitch, Yankees starter CC Sabathia said. "Everybody was excited.''

According to Girardi, getting Rodriguez, and other Yankees, to swing at 3-0 pitches has been a goal this year, and the two had a talk about it after A-Rod let a 3-0 fastball go by in the team's final exhibition game against the Washington Nationals this spring.

There was no doubt from the moment he made contact that the ball would leave the park.

It was Rodriguez's 25th home run at Fenway Park and second off Tazawa -- he hit a walk-off home run off the Red Sox reliever in 2009.

"I've pretty much stunk my whole career as a pinch hitter,'' Rodriguez said, "and I've never been a guy to swing at 3-0.''

Afterward, Rodriguez broke down briefly while being interviewed on the field, and he was doused with champagne by his teammates in the clubhouse.

"One of the reasons why I broke down a little bit was, as a kid, I just thought about playing in the major leagues and really not knowing if I could ever make it," he said. "I just thought about when I was 18 years old and I got my first hit [here at Fenway]. It was an infield hit, and my parents were in the stands. A lot of emotion went into it."

"I'm very excited,'' Rodriguez said. "A year ago today, I never thought I'd be hitting home runs and helping the Yankees win. Being in the middle of it is fun again.''

The Yankees tried to negotiate with the fan who caught the ball -- a Red Sox fan -- but he declined,telling a Yankees security guard and a Red Sox representative that he didn't want Rodriguez to have the ball. He turned down offers of a David Ortiz jersey and other Red Sox memorabilia in exchange for the ball.

Told that for now at least he could not have the ball as a souvenir, Rodriguez said, "Well, I've never been good at negotiating, so I'm going to quit on that."

As if the home run was not dramatic enough, it carries with it further potential for off-the-field drama. Rodriguez reportedly is due to receive a series of $6 million "milestone bonuses" through a separate marketing agreement signed with the Yankees in 2007, and home run No. 660 is the first of those milestones.

The Yankees, however, have said they do not plan on paying Rodriguez the money because of his performance-enhancing drug history. The case could go to an arbitrator.

"I'm so in the moment right now," he said. "A year ago, I never would have dreamed about having this incredible moment. I'm just going to focus and try to keep it on baseball. Those other things will take care of themselves."

The Yankees had gone out of their way not to mention Rodriguez was approaching the historic mark. Prior to one of his at-bats Monday, the scoreboard said Rodriguez was second all time behind Derek Jeter in hits against the Rays. There were no references to Rodriguez's connection to Mays.

If the Yankees continue with their stance and decline payment, Rodriguez, with the support of the Major League Baseball Players Association, is expected to challenge the team's decision through arbitration. If the Yankees are forced to pay Rodriguez, it actually will cost them $9 million, because they have to pay a 50 percent surcharge for being over the luxury tax.

The next milestone bonus would be reached if Rodriguez were to tie Babe Ruth at 714 for third place all time.