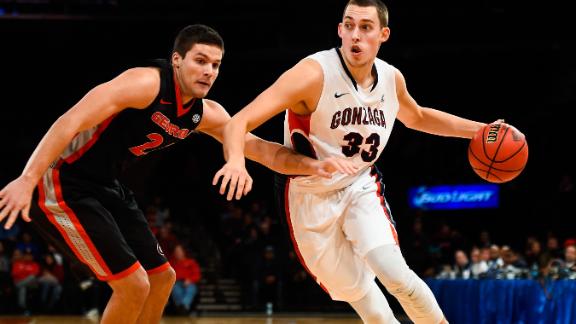 Gonzaga's Josh Perkinsleft Wednesday night against Georgia after being kicked in the jaw during a violent play near the end of the No. 10Bulldogs' 88-76 win.

Perkins was injured in the NIT Season Tip-Off semifinal as he drove the baseline after faking a 3-pointer in the corner.

Georgia'sKenny Gaineswas caught in the air attempting a block, and the front of his right shin caught Perkins flush in the jaw, with the reserve guard immediately clutching his face after the two collapsed to the floor.

Coach Mark Few said Perkins was heading to the hospital after the game for tests.

Kyle Wiltjer scored a career-high 32 points to lead Gonzaga, which advanced to play St. John's on Friday night in the championship game. Georgia will play Minnesota in the third-place game.