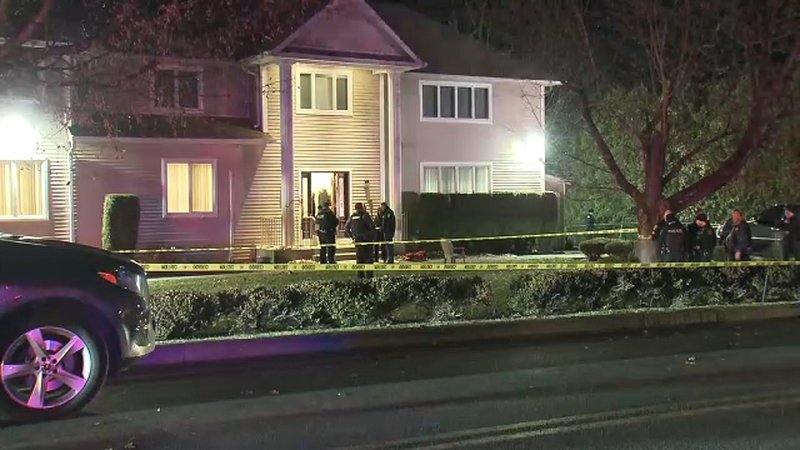 5 stabbed during Hanukkah celebration in Monsey

MONSEY, New York -- A man attacked a Hanukkah celebration at a rabbi's home in Rockland County late Saturday, stabbing and wounding five people before fleeing in a vehicle.

The Orthodox Jewish Public Affairs Council (OJPAC) says the victims were stabbed shortly before 10 p.m. Saturday at the home on 47 Forshay Road in Monsey.

Fifty to 60 people were inside the synagogue, which is connected to the home, at the time. Saturday was the seventh night of Hanukkah.

Witness Aron Kohn described the moment the suspect walked into the Rabbi's residence and began attacking with a knife he described as almost as big as "a broomstick."

"I saw him walking in by the door. I asked who was coming in in the middle of the night with an umbrella. While I was saying that, he pulled it out from the thing and he started to run into the big room, which was on the left side. And I had thrown tables and chairs, that he should get out of here. And the injured guy, he was bleeding here, bleeding in his hand, all over," Kohn said. "I ran into the other room to save my life. I saw him running this way, so I ran the other way to save my life. He said something but I could not understand what he said. I saw him pull out the knife from the holder, the case."

All of the victims were taken to the hospital in critical condition, officials said.

New York Governor Andrew Cuomo said on Sunday morning that the Rabbi's son was a victim and is recovering. One victim is in very serious condition with wounds to the head

Ramapo Police Chief Brad Weidel identified the suspect as Grafton E. Thomas, 37, of Greenwood Lake, New York. He was apprehended in a grey Nissan Sentra at 144th street and Adam C Powell Boulevard in Harlem shortly after the attack.

Thomas entered pleas of not guilty to 5 counts of attempted murder and burglary at his arraignment on Sunday morning. He was ordered held on $5-million bond.

Diana Rocco has the latest on NY Governor Cuomo's remarks in Monsey.

Monsey is one of several Hudson Valley towns that have seen an influx in large numbers of Hasidic Jews in recent years.

The attack appeared to be the latest in a string targeting Jews in the region, including a massacre at a kosher grocery store in New Jersey earlier this month.

Dov Hikind talked to Eyewitness News This Morning about the attack

Governor Andrew Cuomo said he considered the attack "an act of domestic terrorism" after visting the scene and meeting with the Rabbi and his wife on Sunday morning.

"It's a sad and very disturbing morning," he said. "This is intolerance, meets ignorance, meets illegality. This is an American cancer in the body turning one cell on another."

Cuomo added this is about the 13th incident of anti-Semitic in New York in the last few weeks.

"Violence spurred by hate and it's against the law," he said.

The anti-Semitic attack in Monsey, New York, on the 7th night of Hanukkah last night is horrific. We must all come together to fight, confront, and eradicate the evil scourge of anti-Semitism. Melania and I wish the victims a quick and full recovery.

Israel strongly condemns the recent displays of antisemitism including the vicious attack at the home of a rabbi in Monsey, New York, during Chanukah.

The stabbings occurred a month after a man was stabbed while walking to a Monsey synagogue. The man required surgery. It's unknown if the person suspected in that stabbing has been arrested.

Jewish communities in the New York City metro area have been troubled following a deadly Dec. 10 shooting rampage at a northern New Jersey kosher market. Six people died in the shooting, including the two killers, a police officer and three people who had been inside the store.
New Jersey Attorney General Gurbir Grewal said the attack was driven by hatred of Jews and law enforcement.

The stabbings come after the NYPD said they were stepping up patrols due to an uptick in anti-Semitic incidents this month.