In a written statement - Bruemmer credits his surgeons and the swimmers

The swimmer who was attacked while swimming at Lovers Point Beach in Pacific Grove is in fair condition and expected to make a full recovery.

PACIFIC GROVE, Calif. (KGO) -- The swimmer who was attacked while swimming in Monterey Bay on Wednesday is in fair condition and expected to make a full recovery.

ABC News reports the man, Steve Bruemmer, is a triathlete and swims at Lover's Point in Pacific Grove one to two times a week.

In a written statement - Bruemmer credits his surgeons, Dr. Nicholas Rottler and Dr. Kuong Ngann, and the swimmers who rushed to his aid including a police officer and nurse in town from Sacramento.

"The shark bite was unlucky. But after that, I have just had so much good luck. And the day was so calm and warm, and the beach was crowded. There were no waves, and there was no chop. So people could hear me yelling "Help" from a great distance, including from the Rec Trail, where someone called 9-1-1.There were two standup paddleboarders nearby - one was a nurse, and one was a policeman - who knew what to do. On the beach, a surfer was teaching a safety class. He had the presence of mind to get in the water on his board and bring an extra board. Those three (the surfer and the two paddleboarders) got me onto the extra board, and they had me hold the surfer's ankle while he paddled like crazy to get me to the beach. They, along with several bystanders, including a doctor and a nurse who were on the beach for the day, helped put tourniquets on me and get me to the ambulance.I remember I was lying in the ambulance, and I thought, 'my lungs are good. I can breathe.' So I didn't know if I was going to bleed to death, but my lungs were good. And it seemed really lucky that the shark got me in a spot that seemed survivable. I was in the ambulance, thinking I don't know if I was going to survive, but at least I could breathe. Then I don't remember anything for a while.The EMT told me, 'We're about two minutes out from Natividad Medical Center. When you get there, there will be like 15 people to meet you there. They will be poking and prodding and asking questions.'The fact that Natividad has a Trauma Center was a lifesaver. They said I lost a tremendous amount of blood. Without all those things going right; If it had been a choppy day, then they wouldn't have heard me on the Monterey Rec Trail. So yeah, I'm lucky. Without all those things going right, I could have bled out."

The man did not suffer any broken bones or major organ damage.

Emergency personnel responded to the beach around 10:35 a.m. on Wednesday to reports of a shark attack.

According to Broadcastify, after the attack, several people were in the water trying to help the swimmer out. When emergency crews arrived on scene they requested an air ambulance, saying the man had suffered a "lower left leg partial amputation."

The swimmer was flown to the hospital.

Lovers Point Beach in Pacific Grove is closed until Saturday, according to police. 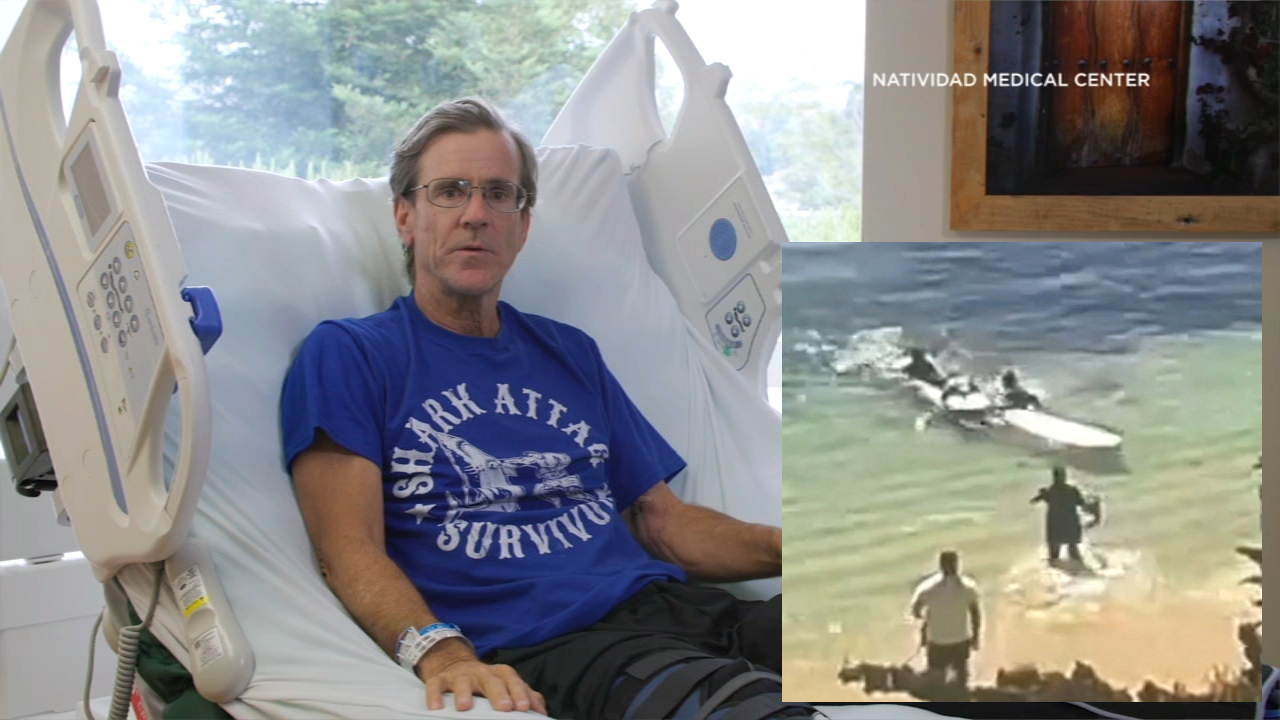