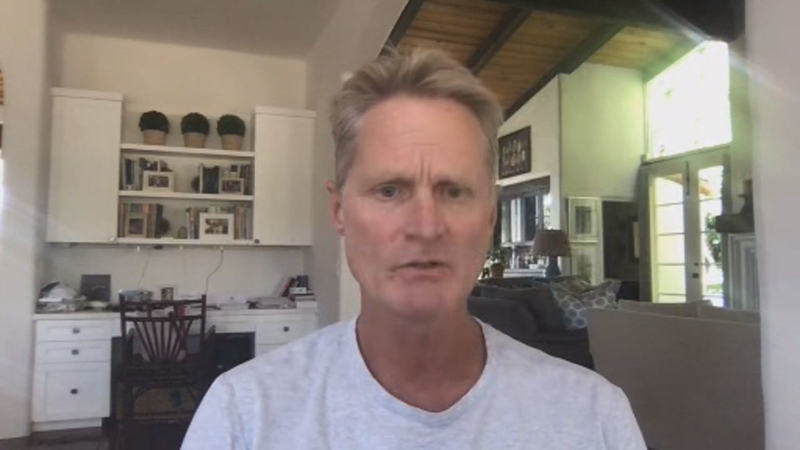 SAN FRANCISCO (KGO) -- The sports world has been intertwined with the political world lately and it doesn't appear that will change anytime soon.

"There's a big part of me that wishes I was there, not only for the basketball part but to lend a helping hand on the social justice front, " said Kerr Tuesday during an interview will ABC7News Sports Director Larry Beil on After The Game.

Kerr also addressed the NBA's decision to postpone three playoff games after the Milwaukee Bucks refused to play their Game 5 against the Orlando Magic over the police shooting of Jacob Blake in Kenosha, Wisconsin on Aug. 23.

"It really is a big battle and I think the NBA has been fantastic," added Kerr. "The league office has been very supportive of the players and coaches. I think last week, understandably the players were just frustrated. How can they not be? How can we all not be?"

Kerr, a former player, and three-time NBA champion coach, says he understands why players are taking a stand against racial injustice and police brutality.

"You peacefully protest, like our players have done, you want change -- but when change doesn't happen -- and another black man gets shot seven times in the back by a policeman it's infuriating, especially if you are a black man or a woman and you are raising children and you are scared in your own country," said Kerr.

He says basketball players are using the spotlight to make an impact and to maintain the momentum.

"I think for the players, they realized that people maybe weren't paying attention to the peaceful protests so they took it a step further and it became an economic protest of sorts and it was very successful," he said.

"What I've learned that's most important is really the definition of racism. I think as a white person, we all think of racism as an act," said Kerr. "Racism is really a system that we are all a part of and, while we may not be directly responsible for the system, we're complicit with our existence within the system. And yet it's really easy for a person like me to make a statement and maybe donate to a charity and then go back to my really nice house in my nice neighborhood and don't think anything more of it."

Kerr is one of the most vocal and politically active coaches in America. He says everyone has an important role to play in the fight to end racism and injustice.

"You have to think of it as system and how it affects the entire black community and also how it affects us as white people in our country. Is this the country we want to live in, with this moral stain that we carry? Most importantly, what are we doing going forward to try to reverse this? What are we doing to help educate young black kids? Are we improving schools? Are we improving nutrition? All of these things are part of racism, but in our minds, we are not responsible. I think that's what I have learned. We are responsible," said Kerr.

Watch the full interview with Kerr below.