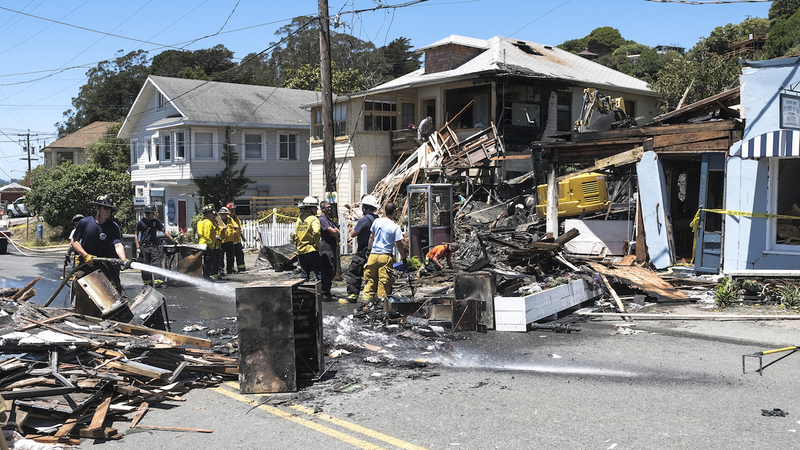 MARIN COUNTY, Calif. (KGO) -- The Marin County Fire Department has ruled out arson or foul play as possible causes of a building explosion in Stinson Beach, Tuesday morning. The fire happened just before 8:30 a.m., damaging eight structures and businesses, five of them seriously.

"It occurred to me that it has to be a propane explosion," said Tim Trumbo, who saw the building go up from his home on the hill above. "Papers in the air, then smoke, then flames."

"The Earth shook," remarked Bonnie Sullivan, who lost a window in her bookstore across Highway One, which runs through town.

Deputies, @CHPMarin and @marincountyfire on scene of structure fire in the area of downtown Stinson Beach. Avoid the area. pic.twitter.com/hvOOd9AFUr

The explosion happened just a few doors from the local fire department. They arrived on scene in less than one minute.

"We had significant debris 150 feet away from the structure," said Battalion Chief Jeremy Pearce from Marin County Fire.

The debris blew through the air like high-speed splintery shrapnel. Fortunately, the daily influx of tourists and beachgoers had yet to arrive. Had they been near the explosion, "It would not be the same event. Lucky that no one was around early in the morning," said Pearce.

The blast originated in an apartment above a real estate office. A woman inside survived without major injuries.

Inside the Sand Dollar restaurant, August Temer also lived to tell about it. "I was in the bar making orders when the windows just popped," he said. His family owns the 99-year-old iconic hub of the town. That establishment won't be opening again for a while, along with a good portion of Stinson Beach's small downtown.

Bonnie Sullivan felt grateful to have only lost that window. "I'm in luck. During shelter-in-place, take it day-by-day."

August Temer, meantime, is still coming to grips with the reality that he survived. "I'm walking. I'm talking. I'm alive."

Just like Stinson Beach, though a bit shakily. "It's going to be a big change," said Bonnie. "There is no going backwards, now."

Two individuals suffered minor injuries but declined medical attention and were released from the scene, the Marin Co. Fire Department says. The cause of the explosion is still under investigation.

Hwy 1 closed at Stinson Beach due to explosion & multi-structure fire. Fire under control, but clean-up expected to last most of day. Avoid area. #MarinCounty pic.twitter.com/b1JUQs8QA1