'Like the abduction of a kid': Martinez veterinarian believes French bulldog puppy was stolen 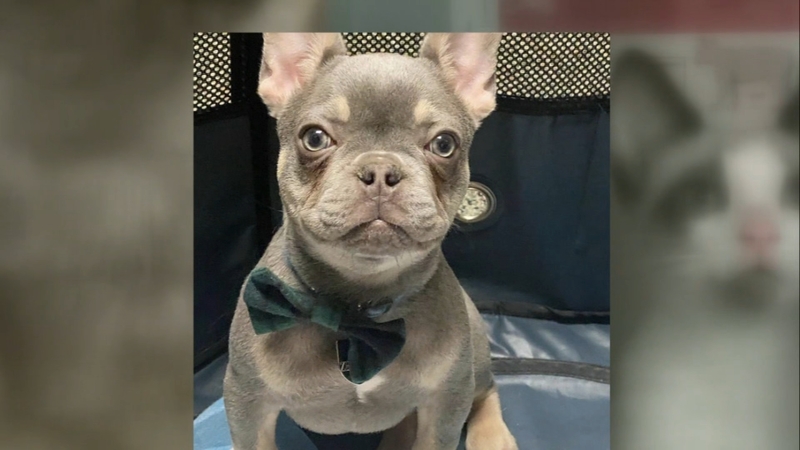 MARTINEZ, Calif. (KGO) -- A Martinez veterinarian is worried sick about her own pet.

The French bulldog puppy, named Zeppelin, has been missing for more than 24 hours. Dr. Heather Burns suspects someone may have stolen him.

"My name and number are in large print. And no one has called and it has been 24 hours."

Dr. Burns acquired Zeppelin when his previous owners could not pay for medication needs to prevent seizures.

The dog stole her heart. Now she worries not only about losing Zeppelin, but also for his welfare without those drugs.

"Apparently Frenchies are being stolen. That of course is where the mind goes. Someone stole him."

Stories of such cases have become all too common. In January, 2021 Sarah Vorhause said three men attacked her at gunpoint while walking her French bulldog, Chloe, on Russian Hill.

The breed has almost become a commodity. French bulldog puppies can sell for thousands of dollars.

"They are amazing. Once you have a French bulldog, you never go back," said Dr. Burns.

She has reported her missing dog to police, the sheriff, animal control and reached out on social media. The more than 300 responses on social media have overwhelmed and reassured her.

"There are lots of prayers for him," she said.

Her only strong clue came from neighbor Cheryl Gordon, who remembers seeing Zeppelin on the street, and the driver of a black car who stopped to ask if the dog belonged to her.

"And I said no and he got in his car and drove down. The dog had gone the way," Gordon said.

So much pain in not knowing.

"These are my family members," said Dr. Burns. "To me it is like the abduction of a kid."

In the form of a French bulldog.