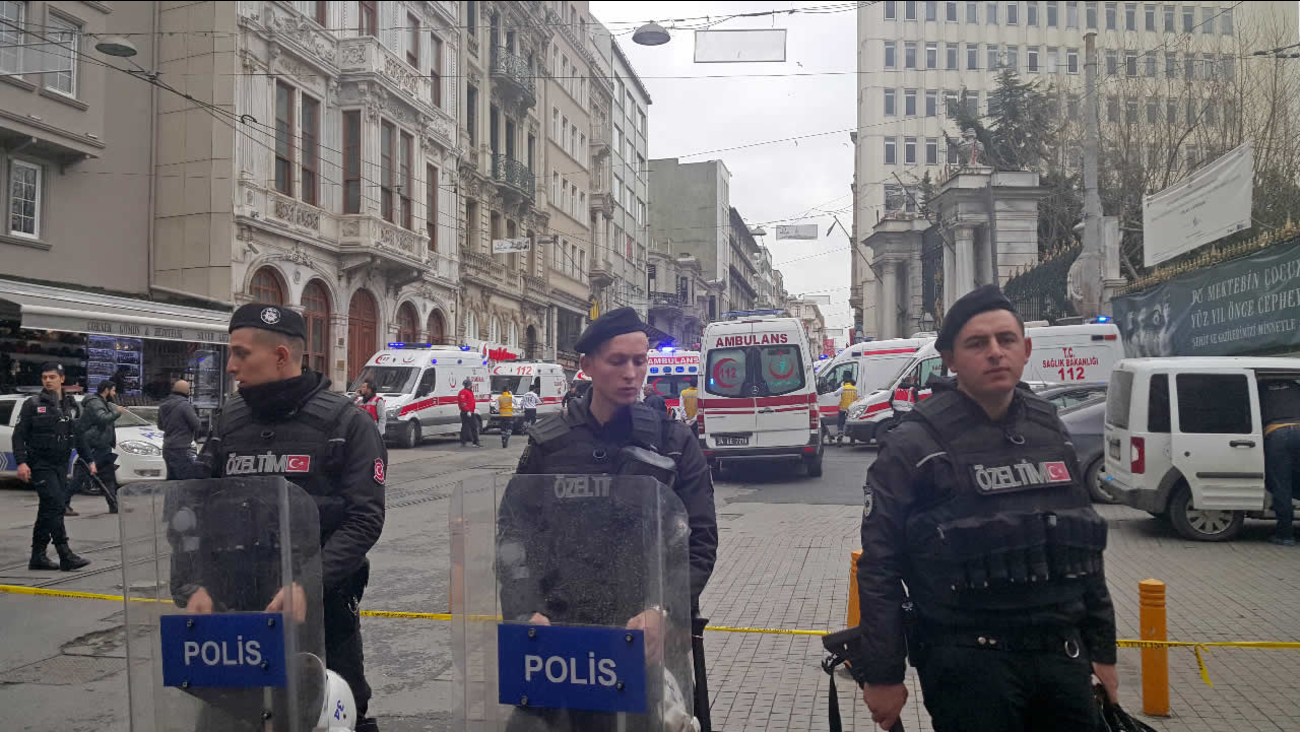 Turkish police cordon off a street after an explosion in Istanbul, Turkey, Saturday, March 19, 2016, after a suicide attacker detonated a bomb. (He Canling/Xinhua News Agency via AP)

ISTANBUL -- A suicide attacker detonated a bomb Saturday on Istanbul's main pedestrian shopping street, killing at least four people and wounding dozens of others, including 12 foreigners, according to officials.

Istanbul Governor Vasip Sahin said the explosion occurred outside a local government office on Istiklal Street, which is also home to cafes, restaurants and foreign consulates. Sahin gave an initial death toll of four and later said one of the wounded victims died in the hospital.

Two government officials including the health minister put the number of fatalities at four.

Turkey's health minister, Mehmet Muezzinoglu, did not specify whether the bomber was among those killed but said 36 people were wounded. His ministry said the wounded included six Israelis, two Irish citizens and one person each from Iceland, Germany, Dubai and Iran.

Turkey was already on edge following two recent suicide car bomb attacks in the capital, Ankara, which were claimed by a Kurdish militant group that is an off-shoot of the outlawed Kurdistan Workers' Party, or PKK. The most recent bombing attack, on March 13, targeted bus stops on Ankara's busiest street, killing 37 people including two bombers.

Turkish Prime Minister Ahmet Davutoglu convened a security meeting in Istanbul following the attack. His deputy, Numan Kurtulmus said in televised remarks "it is clear that some people are giving logistic support (to terrorists), that some are giving political support and that they are even providing financial support as well as arms."

There was no immediate claim of responsibility for Saturday's attack.

A senior government official said authorities were still trying to determine who carried it out, with suspicion focusing on Kurdish militants and the Islamic State group. He spoke on condition of anonymity because he was not authorized to speak to journalists on the issue.

Police swiftly sealed off the area as ambulances and a forensic team rushed to the scene. Normally packed cafes were either closed or virtually empty, with business owners making frantic calls to assure them of their safety. Rattled tourists wondered where to go.

"It was one loud explosion," said Muhammed Fatur, a Syrian who works at a butcher shop near the scene of Saturday's explosion. "Police came to the scene and sealed off the area."

British singer Skin wrote on Facebook said the blast went off near her Istanbul hotel and that buildings "shook like paper." She also expressed solidarity with the "innocent people and their families caught in this evil situation."

Turkey has had heightened security in Ankara and Istanbul in the run-up to a Kurdish spring festival of Newroz on March 21, which Kurds in Turkey traditionally use to assert their ethnic identity and demand greater rights.

Cengiz Fidaner, who owns a cafe near the explosion site, told the AP "the explosion was not so big but I felt it in my heart because our people died. They want a war but our people want peace. This is because of Newroz."

The U.S. embassy in Turkey expressed sadness and shock over the attack on its Twitter account. "We mourn with the families of the lost, and we wish the injured a speedy recovery."

On Thursday, Germany had closed its embassy in Ankara, the German school in Ankara and the consulate in Istanbul, which is in the same neighborhood as the blast, following a security warning. Twelve German tourists were killed in a January suicide attack in a historic district of Istanbul.

Saturday's explosion marks the sixth suicide attack in the country since July. The previous five attacks, which have killed more than 200 people, were either blamed on the Islamic State group by Turkish authorities or claimed by the PKK's off-shoot.

The PKK has been fighting for autonomy in southeast Turkey for three decades in a conflict that has killed tens of thousands of people. A 2-1/2 year peace process between the government and the PKK broke down in July, reviving the conflict. Since then, the country's security forces have launched large-scale operations against Kurdish militants in several southeast cities and towns, which have raised human rights concerns amid scores of civilian deaths.