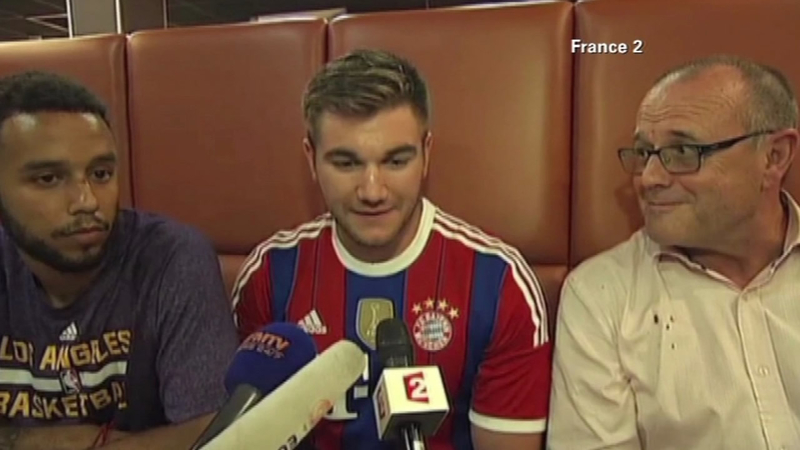 SAN FRANCISCO (KGO) -- The three Americans, Anthony Sadler, Alek Skarlatos and Spencer Stone, who helped stop a potential terror attack on a train in France are speaking out for the first time.

"Spencer ran a good 10 meters to get to the guy and we didn't know that his gun wasn't working or anything like that. Spencer just ran anyway and if anybody would have gotten shot, it would have been Spencer for sure," said Army National Guardsman Alek Skarlatos, recently back from Afghanistan, and who was one of the three men involved in the take down.

Air Force serviceman Spencer Stone, 23, was released from the hospital on Saturday being stabbed in the incident. The Pentagon said his injury was not life-threatening.

The gunman cut Stone as he subdued the attacker. That's when Skarlatos, 22, recently back from Afghanistan, sprang into action.

"I showed up and grabbed the gun from him and basically started beating him in the head until he went unconscious," explained Skarlatos.

The three men, all with ties to Sacramento, were on a train from Amsterdam to Paris, they subdued the attacker with an automatic weapon, Friday morning.

Two of their mothers spoke to the ABC affiliate in Sacramento and expressed their relief after finding out their sons and the lives of others are all OK.

Skarlatos' father says he is very proud of his son, but not surprised by what he did. "They knew they had to do something and they risked their lives," he said.

"In the aftermath, we saw that a man's throat had been slit and he was bleeding profusely, and Spencer, who has some paramedic training, just clogged up his neck so he wouldn't die," Sadler, who is a senior at Sac State.

All three Americans are being hailed as heroes for tackling and disarming the gunman.

Meanwhile, a French official close to the investigation says police have positively identified the train gunman as 26-year-old Moroccan Ayoub El-Khazzani. French Interior Minister Bernard Cazeneuve said earlier Saturday that Spanish authorities had alerted French intelligence to him in February 2014 because he "belonged to the radical Islamist movement," and the French put him on a security watch list.

Tony Sadler said his son, Anthony Sadler, called him to describe what happened and the recognition he is receiving. He said he was first stunned and then relieved his 23-year-old son was not hurt or killed.

"I had thought that this trip, you know, going abroad and traveling for a few weeks would broaden his world view, but never did I suspect he would encounter an experience like this," Sadler said.

He said his son, a senior at Sacramento State University, had planned to travel in Europe with his college friends through the end of August.

"He leaves here a young man on an excursion to broaden his world view and to have fun with his buddies, and he comes back France's national hero," Sadler said.

"He might even meet the president of France before he leaves, so I'm still wrapping my head around that," he said, laughing.

The gunman slashed Stone, a U.S. Airman, several times with a box cutter. His mother, Joyce Eskel, said her son called her from a hospital and told her the gunman also tried to shoot him twice but the weapon didn't work.

"I'm just crying because I could've lost my son so easily," she told the San Francisco Chronicle.

Skarlatos' brother, Solon, told the Los Angeles Times that his brother told him the assault rifle didn't go off because "the cartridge was dead."

He said Skarlatos traveled to Germany to visit relatives he'd never met. Later in the trip, he met up with Stone and Sadler in Amsterdam to watch the soccer team Ajax.

The trio almost didn't get on the train because they considered staying another day.

"Having two military guys on the train and another guy with them, in that area, where the gunman got on, it's almost luck that they were on it," Solon Skarlatos said. "It's unlucky that they were at that incident, but lucky for everyone else that they were the ones who were there at that particular time and that everything happened the way it did."

Solon Skarlatos said his brother made clear during their phone conversation that Stone deserves special recognition for being the first to tackle the gunman, receiving cuts to his back, face and finger during the struggle. After subduing the gunman, Stone, a trained paramedic, turned his attention to an injured passenger and tried to treat that person.

"Alek was pretty much like, make sure he gets the credit he deserves because, if it wasn't for him, things could have ended a lot differently," he said.

"He's always been a hero to me. Now he's an actual hero. He deserves it. He put his life on the line. They all did, and I'm just very, very proud of him. So proud," she said.

El-Khazzani was identified through his fingerprints, according to the official, who insisted on not being identified by name because of the ongoing probe.

The official also said that the French spotted El-Khazzani in Berlin on May 10, headed to Turkey, and informed their Spanish colleagues. On May 21, the Spaniards responded saying that he no longer lived in Spain but in Belgium, according to the French official.

A Spanish official says the suspect in a shooting incident on an Amsterdam-Paris train had travelled to Syria.

The official, linked to Spain's anti-terrorism unit, said the individual lived in Spain until 2014, then moved to France, travelled to Syria, and then returned to France. He spoke on condition of anonymity because he was not authorized to be identified by name.

Cazeneuve said the violence began when a French passenger ran into the heavily armed suspect while trying to enter a bathroom and the gunman fired a weapon.

Three Americans and one British passenger helped subdue the gunman, according to their own accounts.

Two people were wounded - one of the Americans who intervened, and another passenger, a dual French-American citizen, hit by chance by a gunshot, Cazeneuve said.