Before Lululemon, Athleta, and Lady Foot Locker, there was Title Nine - a company started in a Berkeley garage by a Yale athlete.
KGO
By Julian Glover 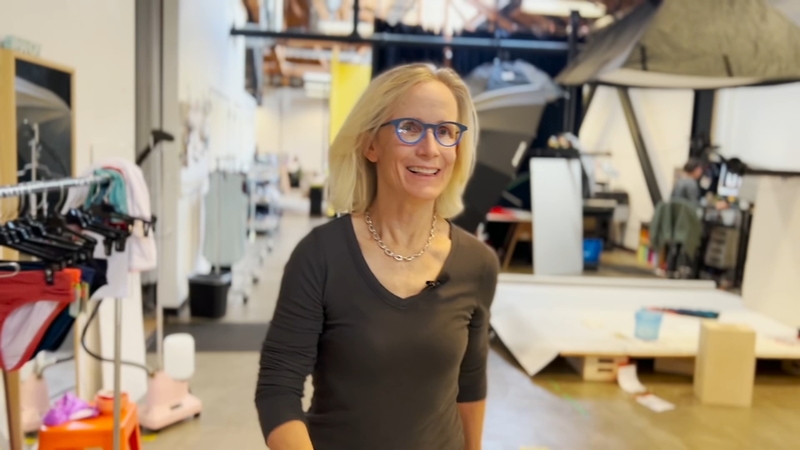 In the Bay Area, the law has transformed the lives of countless girls and women, giving them equal access to sports. But when the law changed five decades ago, industries supporting the sports world- athletic wear and sporting goods - didn't change fast enough.

Title Nine, based in Emeryville, has been working to close that gap for the last 33 years.

"Once Title IX came, we were off the sidelines and onto the fields," said Missy Park, founder of the women's activewear company.

On 50th anniversary of the revolutionary civil rights law Title IX, US soccer star Brandi Chastain looks back on how it paved the way for her career.

"I was in the first generation of girls and women to grow up with Title IX being in effect," she said. "That meant I got to play a lot of sports. And my big sister, four years older, did not."

But being a multi-sport college athlete in the 80s, much like today, was far from glamorous for women.

"We were practicing in the bad practice slots," she said. "The shorts don't fit us. We have permission to play sports, but we don't have sneakers. We're wearing last year's boys varsity basketball uniforms."

50 years after the passing of Title IX, 40% of all athletes are women despite the inequalities that continue.

Title IX of the education Amendments of 1972, shortened to Title IX, may have created women's sports at schools and colleges, but girls and women still struggled to find proper gear to support a new generation of athletes and a new consumer.

"My buddy had to buy her shoes in the little boys department because they didn't make women's shoes," said Park.

So shortly after graduating from undergrad and moving west to the Bay Area, Missy had the idea to start her own women's activewear and sporting goods company.

She would name the company after the legislation that gave her and millions of other girls permission to play.

"Title IX is foundational," she said. "It is the 'without which not' for my entire life. All of a sudden, I'm post-collegiate and I've got nowhere to find gear. And I have all these friends around me that are the same way. I was the only one that ended up starting out my own business and building a company that was gonna serve all these women athletes."

It all started in her Berkeley garage in 1989.

"There was no Lady Foot Locker, Lululemon, Athleta. There was nothing like that," she said.

Park kicked off the business by mailing out 30,000, slim 16-page mail order catalogs. Only eleven orders came in, but there was a clear must-have item.

"For most women who were working out, their single most important piece of sports equipment was not shoes, it was sports bras. Sports bras became the foundation of what turned out to be a pretty fit business," she added.

Today, Park said that "fit business" is a $100 million privately owned company. It's headquartered in Emeryville with 300 employees - mostly women.

"We're very supportive of each other," said Lisa Gilliland, Title Nine senior community specialist. "We really love each other. And I think being able to sweat together and play together really helps to cement those relationships."

The company specializes in active wear to keep girls and women moving.

Keeping active is a core value along with comradery at the corporate office. A lunch hour team workout is offered daily at the campus.

In 33 years, Title Nine has grown to 17 retail locations with four in the Bay Area.

The flagship location is on 4th Street in Berkeley.

"When women come in, they tell us their stories about Title IX and how it really affected their lives and what the law means to them," said Chris Freewoman, Title Nine retail associate.

Women's basketball coaches at NC State, UNC and Duke talk about Title IX and its impact on the state of women's college basketball.

At the corporate office, the meaning of the game changing law is literally written on the walls.

It's not just quotes on the wall," said Park. "We are committed to women owning and risking and leading in every aspect of life."

"I love the creative freedom that I have," said Jacq Safer, Title Nine senior product photo stylist. "I very much feel like my voice is heard a lot more here."

The company recently made headlines for donating $1 million to the U.S. Women's National Soccer Team in its fight for equal pay.

The U.S. Soccer Federation settled with U.S. women soccer stars earlier this year and agreed to pay men and women at an equal rate going forward.

That leveling of the playing field is something Park hopes to see more of.

"My goal for Title Nine is, if we're successful, we're going to have fostered a whole bunch of other entrepreneurs and leaders that will make women leading and risking and owning not so unusual," she said.

"I mostly just want kids to see regardless of their gender that all doors are open."

All thanks to just 37 words: "No person in the United States shall, on the basis of sex, be excluded from participation in, be denied the benefits of, or be subjected to discrimination under any education program or activity receiving Federal financial assistance."

Title IX of the Education Amendments of 1972.