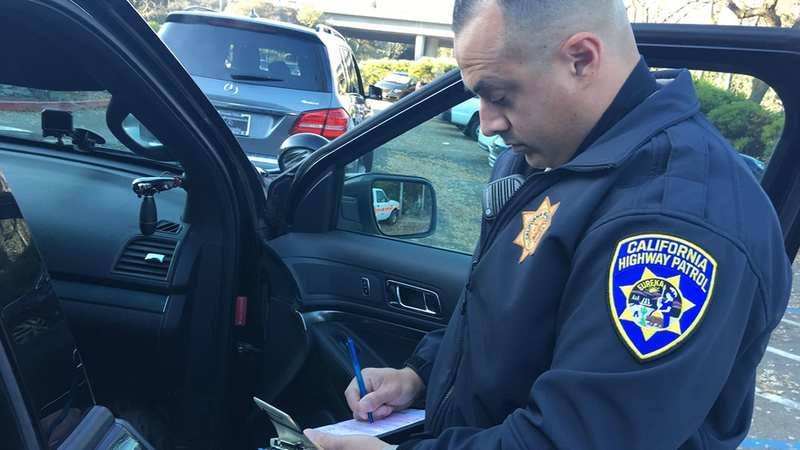 SAN FRANCISCO (KGO) -- A nightmare commute is only made worse when you see people cheating the system. The CHP is cracking down on the problem and ABC7 News reporter Leslie Brinkley rode along with a patrol officer on Thursday to ask questions about what they look for and when they issue citations.

RELATED: Commute Challenge: This might be the fastest way around the Bay

Officer Chris Torrez served as guide to the ins and outs of catching cheaters in the Interstate 680 Corridor. He says he looks for people who zip out of the carpool lane as soon as they see a CHP patrol nearby.

He explained his reasoning, "You obviously weren't supposed to be there because you moved out when you saw me and that's when I'll allow them to pass me and I'll get behind them and make a stop."

When asked what the main excuse people give when they are stopped for cheating, Torrez says, "They tell me they were only in the lane for a second or someone cut them off.

He notes that that doesn't hold water with him.

"No no no," he said. "After hearing numerous times the same thing it's no that's not happening. They'll get a citation."

Got one! Danville driver w paper plates and no transponder cruising in the express lane. Two citations. #abc7news pic.twitter.com/dSORdROPJ2

Along the express lanes through Danville, he says the telltale sign of a cheater is no transponder and oftentimes paper plates to allow the perpetrator to avoid paying the sometimes expensive tolls week after week.

Torrez then stopped a driver with paper plates who had gotten new license plates in June and still not put them on the vehicle. That driver also did not have a toll tag. He was issued two citations. Each citation can cost between $250 and $450.

As for the weirdest excuses Torrez has ever heard, "I've had some dolls and dummies sitting in the passenger seat. I've had people say, 'I'm pregnant, does that count as two?'

When asked if anyone's ever tried to claim that their dog is the second passenger, he said, "Yes. Yes, really. That's a sensitive subject to certain people and I don't want to step on toes to tell them it doesn't count. So I say, 'No you can't do that.'"

The CHP is cracking down on cheaters. In the Golden Gate Division, which encompasses the whole Bay Area, there were more than 18,000 HOV citations written in 2017. This year it's already more than 31,000 HOV violations.