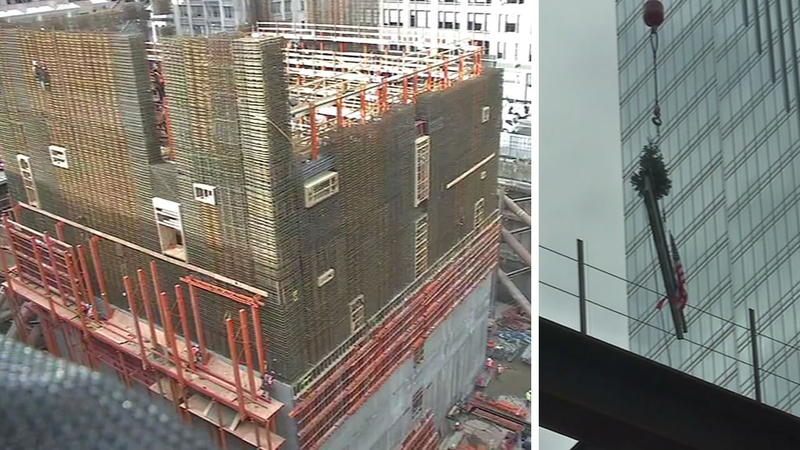 SAN FRANCISCO (KGO) -- The centerpiece of a new San Francisco neighborhood is now one step closer to completion.

Only ABC7 News was there when crews hit a major milestone. High above Beale and Mission streets in San Francisco, a crane lifted a final beam into place.

"It's significant because all the structural steel is now done," said, Maria Ayerdi. Ayerdi oversees the Transbay Joint Powers Authority.

She says the milestone marks the next phase of construction in what will ultimately be the Transbay Terminal, a transit hub some people are calling the Grand Central Station of the West.

"I've been working on this project for 18 years, from the very beginning to now, and to see it coming together it is really a remarkable achievement," said Ayerdi.

Above street level the future rooftop park is taking shape.
Dennis Turchon, is the senior project manager on the Transbay project. "I am standing right where a gondola is going to be coming up onto the rooftop park. That you will be able to take a ride up here, have a nice park lunch and then go back down to work."

The Transit Center replaces the old terminal that was demolished in 2011. When it's complete it will stretch three city blocks. That's twice the length of the Transamerica Pyramid.

ABC 7 News got a sneak peek inside too. Eventually, commuters will be greeted by a grand hall, a gateway to the upper level where buses will pick up and drop off passengers. When completed, it will be a light-filled transit destination.

"Right now, it's as bright as it is going to be when we are done," said Turchon.

Five stories below the center, there are plans to run CalTrain from the Peninsula. Tunnels will link commuters to high-speed rail that will eventually take passengers to Los Angeles.

The Transbay Center isn't the only icon visible at street level in the neighborhood. Iron workers are busy at piecing together the city's tallest skyscraper is rising next door.

"These two projects are once in a lifetime projects it's incredible to see them getting where they are right now," Rob Kane is the Project Manager overseeing the construction of the Salesforce Tower.

The tower will ultimately rise more than 1,000 feet above the ground. The concrete core will be poured using hydraulic lifts that will enable crews to work on the building non-stop.

Technical supervisor Jeff Fluger said, "Years ago we used to control them with water levels, just like the Egyptians built the pyramids. Well now, you can see everything is state of the art."

Work will proceed quickly. The Saleforce Tower will rise a floor every three days.

"By the end of the year we expect to be topped out with the entire building," said Kane.

The tower and center are both expected to open in 2017.