It likely won't happen in our lifetime, but geologists are making sure everyone is prepared, just in case.
KGO
By Cornell W. Barnard 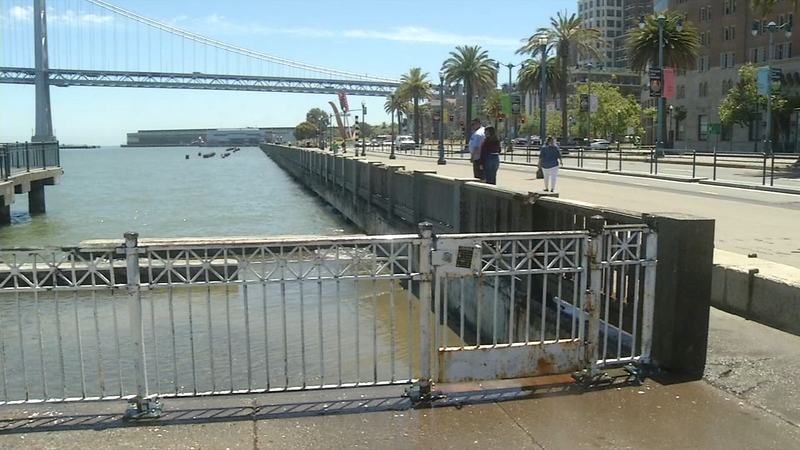 SAN FRANCISCO (KGO) -- Preparing for natural disasters is what many of us do in the Bay Area. Now, state geologists say a once-in-a-lifetime tsunami could inundate more of the Bay Area than first thought.

ABC7 News got its first look at some new hazard maps for San Francisco and the East Bay.

The Bay Area learned first hand what the force of a tsunami can do when an earthquake struck Japan in 2011, sending strong waves surging into Santa Cruz Harbor, leaving heavy damage.

In 1964, a 9.2 earthquake in Alaska sent a tsunami which did heavy damage on the California coast and parts of the North Bay.

Now state geologists are giving us, updated information about where a major tsunami could strike around the Bay Area.

"We don't want to scare people, maps looking at an extreme event that we won't see in our lifetime, but its good to prepare," said Rick Wilson from the California Geological Survey.

Kevin Cooper, a former spokesman for ski resorts near Lake Tahoe, joined ABC7 and described what he saw and felt as an earthquake hit at the California-Nevada border on Thursday.

New technology has allowed the California Geological Survey to update its tsunami hazard maps from 2009, with a perfect storm in mind.

"We are preparing for a worst case scenario. A 9.3 magnitude quake off Alaska, that would be the worst case for San Francisco," said Adrienne Bechelli, Deputy Director of San Francisco's Department of Emergency Management.

In the East Bay, new maps show the event could bring tsunami waves into parts of West Oakland, and Lake Merritt.

Along San Francisco's waterfront, it could be bad.

It was first thought the surge from a tsunami would reach as far as the ferry building and the Embarcadero, but new mapping shows it could reach in the Financial District as far as Fremont Street.

"Especially in the Bay Area, tsunami heights may not be that large, but there's a potential for a tsunami to knock people down and injure them," Wilson added.

PREPARE: What to do if there's a tsunami watch or warning

San Francisco already has tsunami evacuation routes posted, but many will have to be updated.

"So when when in doubt, get to higher ground away from the coast," Bechelli added.

Many people say the threat of a tsunami isn't something they can deal with right now.

"I'll read up on it, but after the year we've had, I can't live in fear, we live in quake country," said El Cerrito resident Lois Moore.

Officials urge residents to have a plan, and sign up for emergency alerts where you live.

You can go here to find out if you live in a tsunami hazard zone.