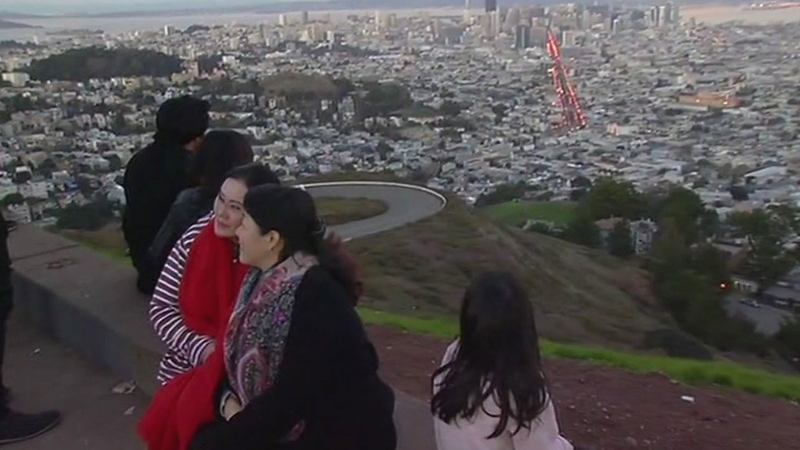 Tourists on alert after French couple robbed in SF

SAN FRANCISCO (KGO) -- A man visiting a scenic lookout in San Francisco is recovering after police say he was knocked unconscious during a robbery. The attackers are accused of mugging three people on a hill at Twin Peaks.

A 91-year-old and 85-year-old brother sister duo who came to Twin Peaks for the view on Tuesday were smiling wide like the teens around them until they heard about Monday's nearby mugging that left an 81-year-old man unconscious and his 77-year-old wife bruised.

91yo man says tourists shouldn't be deterred from visiting Twin Peaks, but they need to "be careful" & enjoy view pic.twitter.com/ZIONXyI2Wu

"I think that's sad, very sad," said the sister. "No respect for the elders anymore, that's what I feel."

The couple was photographing the city skyline with their daughter along Twin Peaks Boulevard when Officer Albie Esparza says two men in their 20s approached.

"They demanded the camera from the victim, he gave them the camera," he said. "At that time a secondary suspect came over from behind, kind of an intimidation factor if you will, and then after he received the camera the suspect shoved the 81-year-old male to the ground."

The victims lost their high-end camera, French passports, and money.

"I have my big strong brother with me," she said. "But I hadn't thought about being nervous."

Police warn visitors that bulky cameras make them easy targets, like the Thai tourist who was shot on Lombard Street earlier this year.

Michigan native Suzanne Waller says she never expected to feel on guard while on vacation.

"I like to think that the U.S. is a safe place to travel in and it certainly pains me," she said.