UC Berkeley student back in Bay Area after ICE release 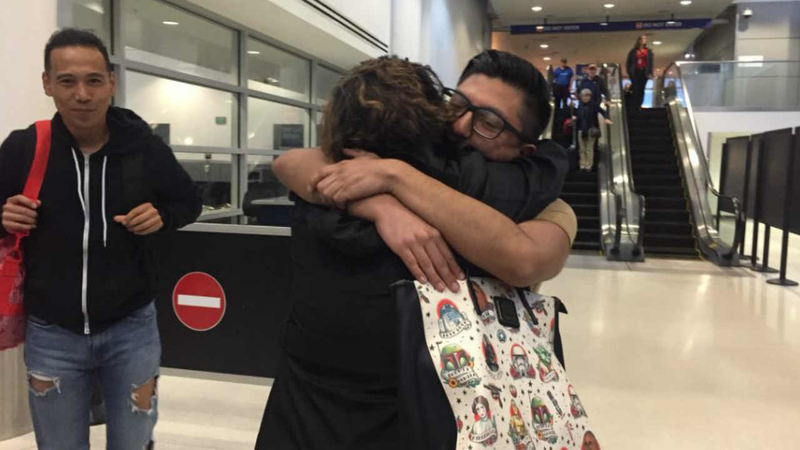 UC Berkeley student back in Bay Area after ICE release

OAKLAND, Calif. (KGO) -- A UC Berkeley student is back in the Bay Area after having been arrested at a border checkpoint in Southern California. Student groups to senators pushed for Luis Mora's release. He arrived at Oakland International Airport to cheers and hugs. The U.C. Berkeley junior is free for now after having posted bail.

"I'm a little bit nervous but I'm excited to continue my education and show everyone what dreamers are made of," said Mora.

Mora was released on Wednesday after spending two and a half weeks at a San Diego detention facility. The 20 year old was in Southern California visiting his girlfriend when he made a wrong turn and encountered a border patrol checkpoint. He was arrested for his undocumented status.

Mora was brought to the U.S from Colombia as a child and overstayed his visa.

"At the end of the day, I knew that everything happened for a reason. God puts you in a situation that is meant to benefit an entire society." said Mora.

Mora says his mission now is to fight for people like him. Several Cal students showed up at the airport to welcome him home, despite never having met him.

"I've never personally been detained," said UC Berkeley student Edson Arroyo. "I've had family members who've been detained, but knowing that we're here to support each other is really powerful."

As for his long term prospects, Mora says he's confident he'll eventually become an American citizen. His goal is to serve the country by working as a U.S. Diplomat.

"We're hard workers and we deserve to be in this country and we're not criminals," said Mora.

His next court hearing will be sometime next year.

Click here for more stories, photos, and video on immigration.

#UCBerkeley student Luis Mora who was arrested at a border checkpoint will return to class tomorrow now that he’s free on bail. He says he’s confident he’ll eventually become a U.S. citizen. pic.twitter.com/dRYI6FkRHO

#UCBerkeley student Luis Mora arrived @IFlyOAKland. He’s free on bail after being arrested at a border checkpoint. Mora says he’s excited to resume his education and show everyone “what dreamers are made of”. pic.twitter.com/aEjMfTUCR4