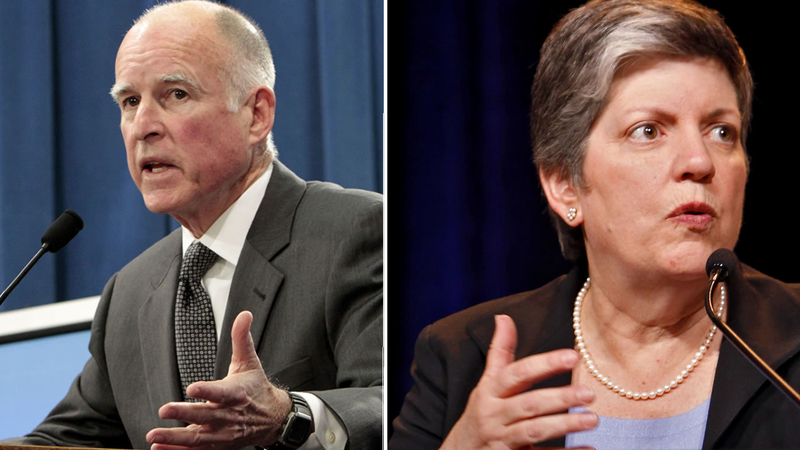 SAN FRANCISCO (KGO) -- An exclusive new committee has been created to take a look at the costs that drive the University of California.

There are only two members: Governor Jerry Brown and President of the University of California system Janet Napolitano. Napolitano who served as Governor of Arizona from 2003 to 2009 and United States Secretary of Homeland Security from 2009 to 2013,.

Both have been at odds with how much money it costs to run a UC school.

If anyone thought Governor Brown would change his tune regarding UC funding, they were wrong. Brown once again suggested UC should tighten its belt.

"We fund what we fund and you manage as best you can," said Brown.

But President Napalitano reminded the governor that the formula for funding the UC's has changed. Today they receive $460 million less from the state than they did in 2007.

This is what Napolitano told the UC Board of Regents hours before.

"We cannot continue to do all of these things without adding revenue. We are already educating thousands more California students than our current level of state funding supports," said Napalitano.

This back and forth started in November when the regents voted to have the option to increase tuition by five percent every year for five years if the Governor didn't add more to the pot.

In January, Brown said he would give the UC what he had previously pledged - $120 million dollars more to the UC's budget. That extra money comes from Prop 30, approved by voters two years ago to raise taxes to fund education.

But Napolitano said the university needs an additional $100 million over what Brown is offering to maintain the academic quality of the UC system and to enroll more California students.

However, now both Brown and Napolitano - the sole members of this select advisory committee - will begin meeting in private to try to exchange ideas and find common ground.