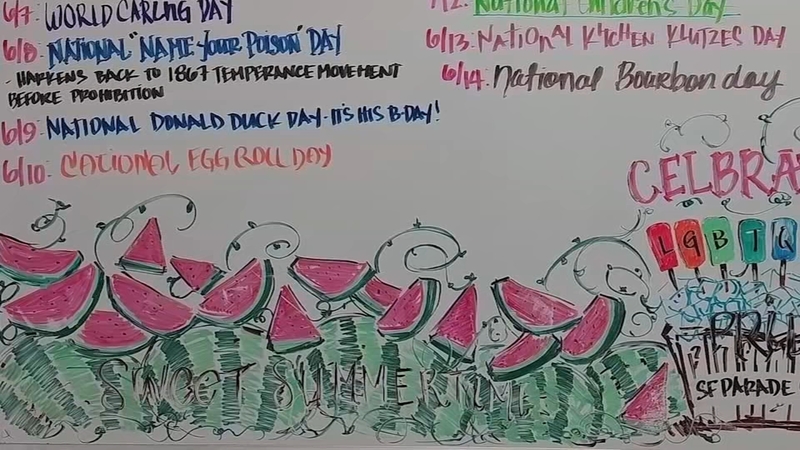 SAN FRANCISCO (KGO) -- An employee with UCSF says she's disappointed and hurt by the way the hospital initially responded to her concerns about discriminatory images at the facility.

Bernadette Price says she's worked there for more than a decade.

Price, who works in the operating room at UCSF Parnassus, says she was disappointed when she recently saw a dry erase board at work list notable June days but left Juneteenth off. The board also had pictures of watermelons in it.

"Watermelon and chicken have been associated with Black people, slaves, things like that," she said. "So even for that to be there during that particular month, it just didn't sit well with me."

She says the person who drew the images was on vacation so she went to that person's manager, who said it would be removed.

"Even if you weren't aware of the damage or how hurtful that was when we brought it to your attention by you removing it, I respected that," said Price.

But after the Juneteenth holiday, Price says the board was back up, this time listing the holiday with images of cantaloupe, watermelon and honeydew along with the words, "Just seasonal summertime melon only."

"When I saw it I stopped and I just started trembling, I started shaking," said Price. "I was hurt."

From Berkeley to Oakland, the East Bay is celebrating freedom on this Juneteenth holiday, commemorating the end of slavery in the United States.

"The watermelon and chicken thing has been a thing for Black people forever, I don't know who doesn't know that but when it's brought to your attention and you're educated on it what's the excuse now," Price continued.

"We looked into the matter and learned that the whiteboard has been erased. The staff who work on the floor represent many diverse cultures, ethnicities, and backgrounds, and they use the whiteboard to share celebrations and announcements every month. After speaking to staff who were involved, we determined there was no negative intention, but we do understand that one of our employees found part of the celebratory illustration for the month of June triggering. We regret that the whiteboard illustration created concern for our valued employee. Because maintaining a work environment in which all of our employees feel comfortable is very important, staff in good faith sought to change the whiteboard. After learning that the changes did not address the employee's concern, our local manager made the decision to have the whiteboard erased. Advancing the dialogue on race and racism requires sensitivity and an openness to discovering new and multiple perspectives. As a learning organization, we celebrate diversity, work to advance equity, and promote inclusion. When we don't get it quite right, even when guided by the best intentions, we work quickly to address concerns with the goal of creating a welcoming environment for all of our employees."

Price told ABC7 News, "I understand some people may not get where I'm coming from but I think it's because they've never dealt with some of the issues I've had to deal with. I hope we can all learn from this experience and make things better. That's the best thing I can say."