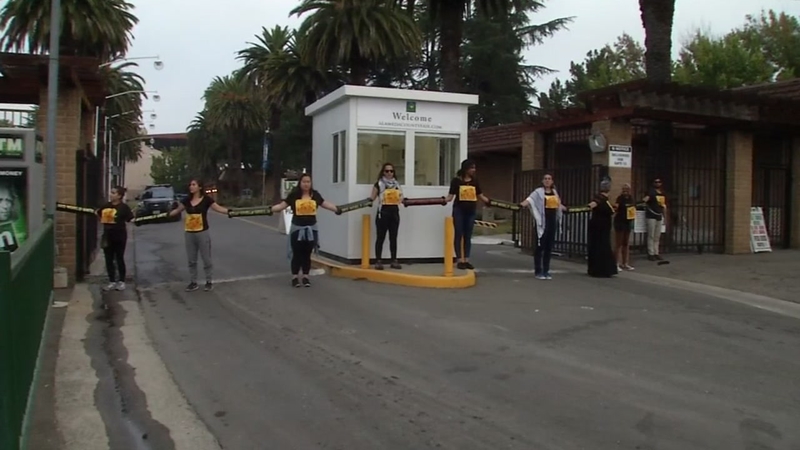 PLEASANTON, Calif. (KGO) -- A massive law enforcement training event called Urban Shield in Alameda County has not only brought officers from around the country to Pleasanton, but protesters as well.

The protesters formed a human shield to protest Urban Shield, a weekend of training exercises for law enforcement and first responders. This group questions the tactics used, calling them militarized war games.

"When we have local health responders trained in military tactics and policing tactics, because then the intuition is that when you are treating something as a health related emergency it ends up being criminalized. People end up being hurt," said Alicia Bell, Stop Urban Shield protestor.

The ACE train station across the street from the Alameda County Fairgrounds prepared early for the protests, closing the gate of one of the entrances at 5:45 a.m. and checking for train tickets at the other entrance so only passengers could get in to the parking lot, exasperating some commuters.

"It was busier it took longer I was getting a little angry," said a commuter.

A few people who saw on the news that this was happening, quickly made their own signs and showed up to present the other side.

"The police have to be ready for all types of situations and these people who say police are turning in to a military force, that's just not the case they are here to protect and serve the people of this country," said Dennis Mulhall, Pleasanton resident.

The protestors covered several entrances at the fairgrounds, but at one location cars drove around them. Another was unmanned and participants easily got inside and started their conference without interference. Still, protestors say they plan to go the distance.

"We're willing to stay until they shut it down until we have to," said Mulhall.

Urban Shield will continue through the weekend at the fairgrounds.