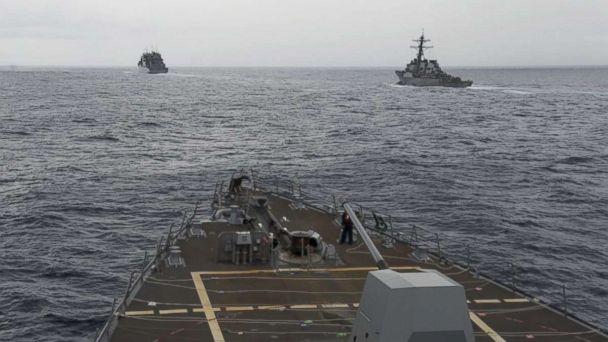 A U.S. Navy destroyer sailed within 12 miles of the disputed Scarborough Shoal in the South China Sea on Monday in a challenge to China's maritime territorial claims that will likely set off renewed Chinese complaints.

"The guided-missile destroyer USS Preble conducted a Freedom of Navigation Operation (FONOP) in the South China Sea, May 20. USS Preble sailed within 12 nautical miles of Scarborough Reef in order to challenge excessive maritime claims and preserve access to the waterways as governed by international law," said Cmdr. Clayton Doss, a spokesman for the Navy's Seventh Fleet.

Under international law, a country's territorial water limits extend 12 nautical miles from its coastline. The U.S. Navy will sail what are known FONOPS within that limit to challenge a country's excessive maritime territorial claims.

"U.S. Forces operate in the Indo-Pacific region on a daily basis, including in the South China Sea," Doss said. "All operations are designed in accordance with international law and demonstrate that the United States will fly, sail and operate wherever international law allows. That is true in the South China Sea as in other places around the globe."

Monday's passage by the USS Preble is only the Navy's second Freedom of Navigation Operation off Scarborough Shoal -- the first one was in January 2018.

The passage past Scarborough Reef was the USS Preble's second FONOP this month. In early May, the destroyer was one of two warships to sail past the Spratly Islands.

The Pentagon has criticized China's militarization of the Spratly and Parcel Island chains.

China has placed significant military structures and equipment on seven artificial islands it's built on reefs in the Spratly Islands.