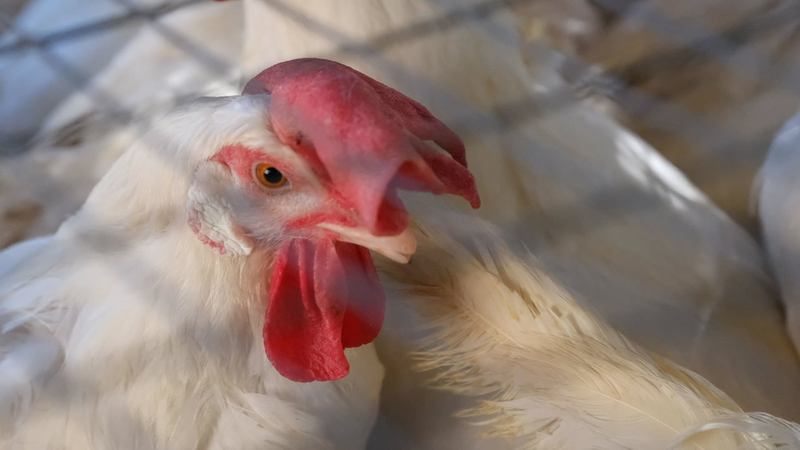 VACAVILLE, Calif. (KGO) -- Here's a variation on the age-old question: Why did the chicken cross the road?

PHOTOS: Hundreds of chickens freed in Vacaville from life of egg production

Now, the twist: Why did cage after cage of chickens arrive by caravan in Vacaville, Friday?

Answer: To stay away from the other side.

"Leave and don't look back. Just look at the ones you saved," Susan McCracken told us. She had been up 24 hours, traveling roughly 800 miles round-trip, rescuing two-thousand hens from a Southern California commercial egg farm. At eighteen months old, their production had dropped. They would be depopulated, as the industry describes it. Hence, a rescue operation by this non-profit called, Animal Place.

"We rescue all farm animals. The world sees them as food. We see them as sentient creatures," explained founder Kim Sturla. The group has saved and adopted out some 25-thousand hens in seven years.

Other animals, too. "You know, 98.5 percent of the animals killed in the United States are chickens, pigs, cows. All for food production."

You might regard this organization as vegans taking action. "It hurts my heart," said Jan Galaezzi, who works with the group. "I see how they suffer. You cannot kill something that wants to live. I have watched many so-called humane slaughters and have not seen one, yet."

One by one, volunteers unloaded cages of scraggly chickens and opened the lids. The hens poked their heads above, tentatively, then lept. They had known only confinement all of their lives, while laying three-hundred eggs a year.

"Until now, they have never scratched, felt ground, opened their wings, understood what it feels like to be birds," Susan said.

Not anymore -- by the end of the day, the birds flapped their wings, teased a resident rooster, and began to act like chickens.

Call it the first day of the rest of their lives.

Independence Day for hens, on a July 3rd.