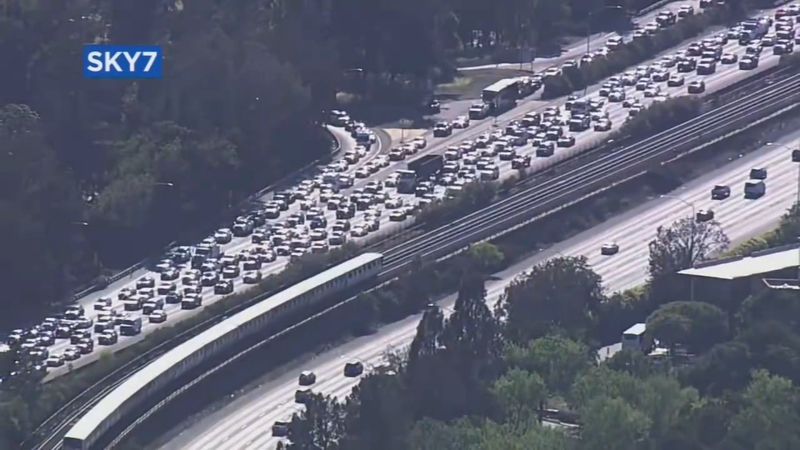 WALNUT CREEK, Calif. (KGO) -- It was an afternoon of chaos on East Bay roads for several hours on Wednesday.

Around 1:45 p.m, Contra Costa CHP and Walnut Creek police responded to a man standing in the center divide of eastbound Highway 24 and northbound Interstate 680.

Upon making contact, police say the man appeared to be suffering from a mental health crisis.

A negotiating team was called to the scene, and officials shut down the freeway, causing major delays.

SKY7 video shows cars lined up on East Bay freeways after a man on the Hwy 24/I-680 overpass caused a severe traffic jam.

Amanda Youkhaneh was one of the drivers caught in slowdown.

"I sat at a complete stop on the freeway. It was just bumper to bumper. I went on just Google Maps to see my ETA just shifting," she said.

She says she had no idea what was causing the massive backup.

"I figured there was some massive accident I was coming up on or something," Youkhaneh said.

It was a similar story for Chase Hoover-Mohun too.

He says he was trying to drive from Berkeley to Pleasant Hill.

SKY7 was overhead as a person was taken into custody after police activity on Highway 24 prompted the shutdown of lanes and a major backup.

A drive that normally takes him around 35 to 40 minutes, but Wednesday around an hour and 45 minutes instead.

"No one was having fun in there. People were looking at each other, shrugging," he said.

But even after the incident ended, some drivers tell ABC7 News the day's events were still being felt.

Yakinn Bello says he was running hours late to pick up his kids.

"They are still waiting for me to pick them up," he said.

While others say they planned ahead and weren't impacted as much.

"I plan ahead. I'm very conservative because you never know what can happen. So it was okay," said driver, Megginn Yuen.