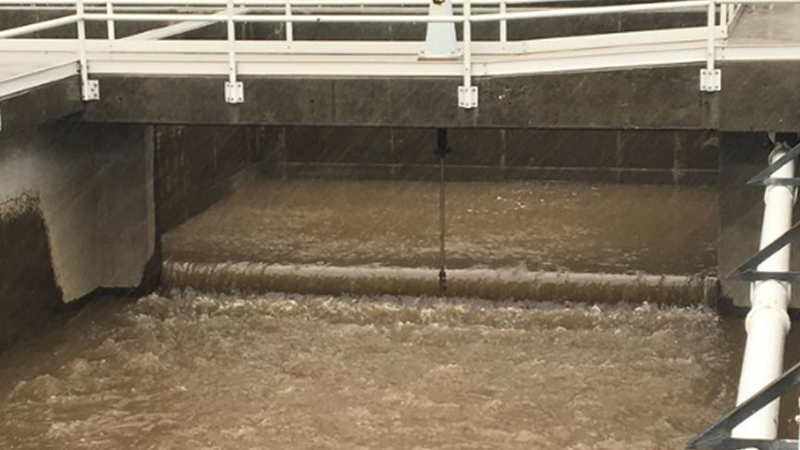 It's the rain effect you can't see that keeps East Bay Municipal Utility District (MUD) officials up at night.

The same rainwater that fills local reservoirs can get mixed in with untreated sewage, and under the right circumstances, end up in the bay untreated.

"The rain is coming into the sewer pipes of the cities and makes its way to our interceptors," says Eileen White, a wastewater treatment manager for the East Bay Municipal Utility District, standing in front of a bank of computers that keep track of water flows.

East Bay MUD monitoring water flow into the system during the rain. Old, leaky underground drain pipes have tripled the amount of water they must treat today. pic.twitter.com/LntSiS3vym

"Yesterday at this time when it wasn't raining, our flows were about 50-million gallons per day," she says.

That's the rate at which water comes into the system, projected out over a whole day. Today's rains changed tripled that amount.

"In the last hour we've seen the flows go all the way up to 165 million gallons per day" according to White.

She says the wastewater treatment system is designed to clean up water filled with sewage before it's returned to the bay. But, old, leaky municipal water mains and the pipes leading from homes allow millions of gallons of rainwater to mix in.

"We want to keep wastewater in the wastewater system and the separate system in the East Bay for the stormwater," she says.

Too much stormwater infiltration could create overflows and spew untreated sewer water into the bay.

Excess water flowing into East Bay MUD’s Pt. Isabel facility in Richmond. This is one of three back up plants only brought on line when rain brings 200 million gallons of water per day into the system. 4 times the normal amount. pic.twitter.com/eoSTEq0jGY

That forced East Bay MUD to open it's Pt. Isabel facility in Richmond to divert and store some of that excess water until things calm down.