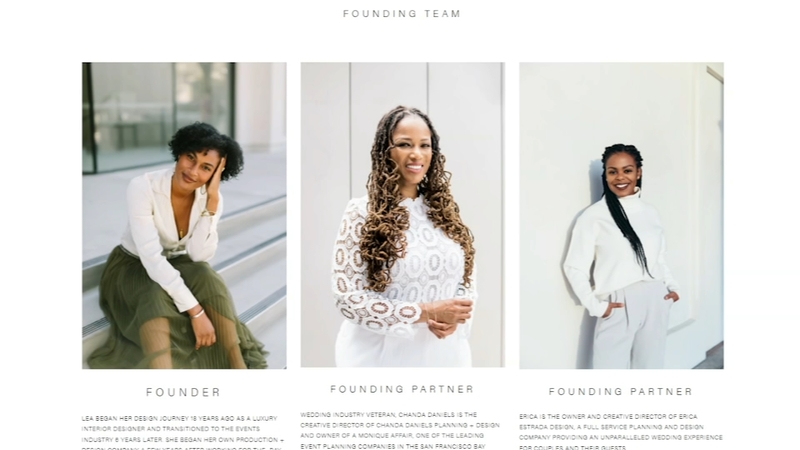 "Every single couple's story is so different and I get to go down that road with them," Daniels said.

"I had to figure everything out on my own, and it was a tough journey to be on because there wasn't anyone that looked like me," Daniels said.

In addition to the physical differences from other planners, Daniels, who is happily married to her wife, noticed that LGBTQ+ representation was virtually non-existent.

"After doing a little research and looking at the wedding magazines, I saw that there was no one of color and absolutely no LGBTQ+ couples," Daniels continued. "For me, that was one of my passions because I didn't want couples to have to come out to every single wedding creative and have that opportunity to be denied because all they're doing is expressing their love."

It's been a ride, but you could say Daniels has arrived. She's been named a top planner by publications like Brides, Harper's Bazzar, and Martha Stewart Weddings. She's also sharing the industry knowledge that had been kept from her for so many years.

"There was a need that wasn't getting met and people were just out here trying to make it," Daniels replied.

Daniels is a founding partner of the Ethos West Collective , a group created in 2020 to highlight Black professionals in the luxury wedding space. Floral designer Melissa Sullivan, who owns Le Bloomerie, is a member.

"Business has been sent my way without a hesitation and it's been great to tell you the truth," Sullivan said. The Ethos West Collective has helped expand her client list and increase sales.

"I approach floral design as if you were creating a painting or some type of artwork," Sullivan replied.

"It is our duty to fight for our freedom!" A throng of hundreds of marchers repeats in unison. Chelsea Miller, the 24-year-old co-founder of the activist group Freedom March NYC, isn't fazed by the moment. Only the mission matters.

Her work speaks for itself, but Sullivan told ABC7 News that her three years in the luxury wedding industry has been tough in some ways. She has had to navigate micro-aggressions and hostility from venues.

"Clients are often surprised to see me sometimes if they've never seen me before there's a bit of a shock," Sullivan added. "Sometimes I'm at the venue and people think my assistant is the owner."

Sullivan, like most wedding professionals, has to be approved to work at a venue. In the wedding business, there is something called a "preferred vendor list." It is a list of anything from florists, to caterers, and even DJ's that the wedding venue either prefers or requires couples use.

VIDEO: Mom volunteers to be mother of the bride for LGBTQ+ couples
EMBED More News Videos

This mom stands in for family who choose not to be at LGBTQ+ weddings.

Preferred vendor lists have been the source of gatekeeping for decades and whether or not it was intentional, so have publications.

"In the summer of 2020-- with the racial unrest following the murder of George Floyd, we really started having conversations as a team as well as with the wedding community," Anna Price Olson, editorial director of Brides, said. "(We) realized we weren't being quite as intentional with our inclusivity as a we intended to be."

The 87-year-old brand launched their Diversity Pledge that summer to highlight their commitment to anti-racism and their results so far.

"Those are numbers, but our goal here is that we want you to feel seen and we want you to see a wedding and a bride and a groom that may look like you," Olson explained.

In Q4, 100 percent of Brides' newly published feature stories with multiple sources had BIPOC voices. The vendor roundup published that quarter included more than 30 percent of BIPOC-owned businesses. Brides has been collaborating with the Ethos West Collective since 2020.

"My world has grown bigger from knowing them and all of the amazing people that are part of the Ethos West Collective. From florists to photographers to planners and discovering talent that I didn't know previously," Olson said.

There is clear evidence of progress. Daniels, Sullivan and so many other wedding professionals have faced the painful reality that some do not equate Blackness with luxury, but they plan to keep working at it to make sure they do.