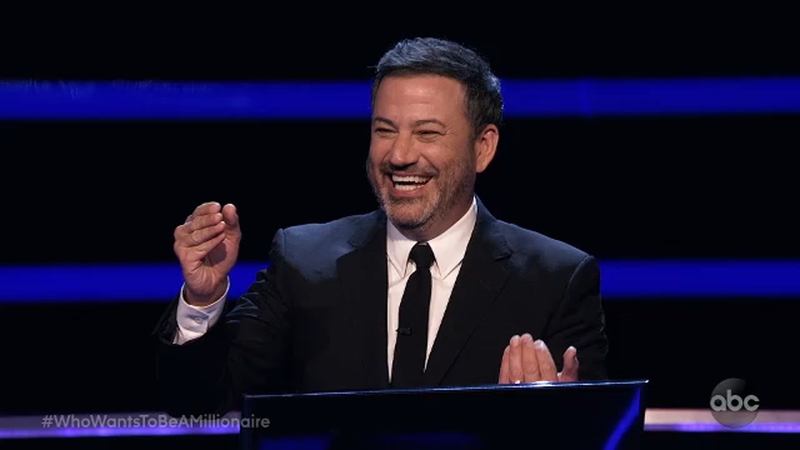 NEW YORK -- "Who Wants to Be a Millionaire" returns to primetime on ABC Sunday night, hosted by Jimmy Kimmel.

The contestants are frontline workers in the battle against COVID-19. Celebrities also play the game with their winnings going to their favorite charity.

Talking to Kimmel never seems like work because it is always highly entertaining. In that way, he is like his late friend Regis Philbin, who was also spontaneously funny. "Millionaire" has played a role in both their lives and for the younger man, hosting is a labor of love.

Before Kimmel ever hosted the game, he was a fan of the show, and his enthusiasm is obvious.

"It's almost like a fantasy camp, like baseball fantasy camp," he said. "You get out on the field, and you feel like a player even though you're not. That's kind of how I feel stepping into Regis' uniform."

Philbin's duties hosting spanned two decades starting in 1999. Kimmel will pay his late friend tribute at the end of the episode on Sunday evening, and he remembered him with affection on "The View," telling co-host Joy Behar, "I loved Regis. I love that he would announce his presence in every room he entered."

Surely, these are big shoes to fill, but Kimmel puts his own spin on the familiar format when contestants get to ask the host to help them answer a question.

"And then I have to come up with an answer, I could actually cost someone a million dollars, and that is not a situation that I take lightly," he said.

Kimmel is back in action again after taking the entire summer off and spoke about what time away from the show taught him.

"It was really a relief, I have to say, I've been working non-stop since I think I was 14 years old, the last time I had a summer off, so to be able to just kind of hang out with the family, it was a great bonding experience, and I'm excited to get back to work, but I'm also excited to take next summer off," he said.