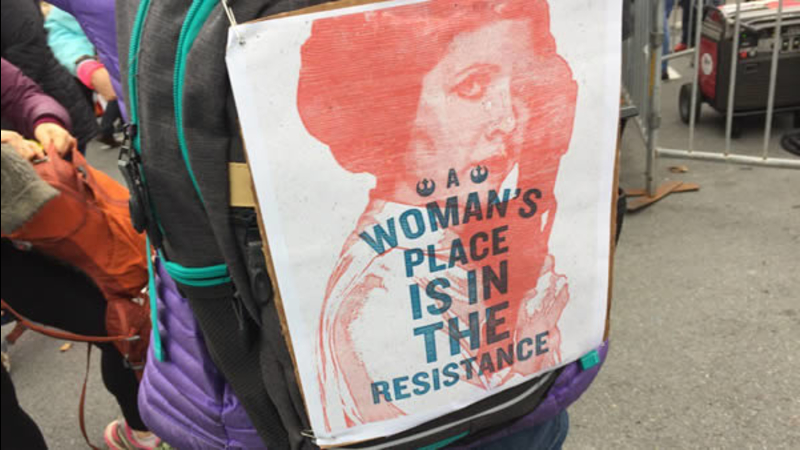 SAN FRANCISCO -- Organizers said at least 40,000 people come from all over the Bay Area to San Francisco Saturday afternoon for the Women's March, a day after the inauguration of President Donald Trump.


If you're driving into San Francisco, be aware that there will be street closures near the Ferry Building along the Embarcadero during a candlelight march at Justin Herman Plaza, which started at 6 p.m.

A rally was held at 3 p.m. at Civic Center Plaza. After the rally, people headed down Market Street to Justin Herman Plaza near the Ferry Building.
Charlotte, a teenage girl from Cupertino, said she came up from the South Bay to participate "for my sister and my mother and myself."

"It's important to do this march now because I'm going to be 17 in two days and Trump is going to be the president when I am just becoming an adult," she said. "I think the older generation still has a voice and should use that voice, but it's also important for my generation to join in and speak up about what they think is right."

Kathleen, an older woman from the East Bay, said, "She's absolutely right, someone needs to pick up the baton and finish the race."

Kathleen wore a pink "pussy" knitted hat with cat eyes and whiskers on it. Many at the various Women's Marches taking place nationwide have sported similar hats, a reference to a 2005 video released during the presidential campaign in which Trump told an entertainment reporter about grabbing women by their genitals.

Sister Merry Peter from the Sisters of Perpetual Indulgence, an order of queer nuns, said sisters are marching in 38 cities nationwide.
"We're here because women have always been with queer people in their struggles and it's time to pay that back," Peter said. "Today is the day our community has said that we have to have a rally to show that this election, while (Trump) may have won, he did not end the conversation."

The San Francisco march is one of several that have taken place around the Bay Area, with others held in Oakland, San Jose and Walnut Creek.