YORBA LINDA, Calif. -- Witnesses say the residents of one of the homes set ablaze in the plane crash in Yorba Linda were hosting a Super Bowl party at the time of the fatal wreck.

The small plane lifted off from Fullerton Municipal Airport shortly after 1:30 p.m. Sunday. Authorities said the pilot flew the 1981 twin-engine Cessna 414A about 10 miles before he encountered some sort of mid-air issue. That's when the plane crashed into a Yorba Linda neighborhood.

Authorities said the aircraft climbed about 700 feet before making a sudden decline down.

The Orange County Fire Authority said there were at least two active structure fires at the scene on Canyon Drive near Crestknoll Drive.

There was one home that suffered the most fire damage. Witnesses said when they ran outside, they saw that home immediately engulfed in flames.

In that home, four people were killed - two men and two women. The man flying the plane also died in the crash. Witnesses said that's the home where the Super Bowl party was being held. Witnesses also said they saw people escaping that home, screaming for family members they couldn't find.

A witness' video shows the two-story home engulfed by a massive inferno as horrified neighbors look on and two explosions are heard.

In the footage, a piece of the plane's wreckage is burning in the street. A man is seen dousing it with water from a garden hose. Another man then uses a fire extinguisher to put out the flames.

One neighbor, Tony Tomminelli, said he heard an explosion from up above.

"I walked outside and I look up and I just see debris flying everywhere. Part of a plane, which I guess eventually was the motor, flew down into the garage like a torpedo - just hit the garage and blew up," he said.

He ended up sliding down the hillside to try and help.

Other debris from the aircraft was scattered on nearby rooftops. NTSB officials said the debris field was about 4 blocks long. NTSB officials were expected to arrive at the scene Monday morning to continue the investigation.

It may take up to one year to get a full report into the cause of the deadly crash.

Nearby Glenknoll Elementary School was closed Monday to be used as a command post for the developing investigation. 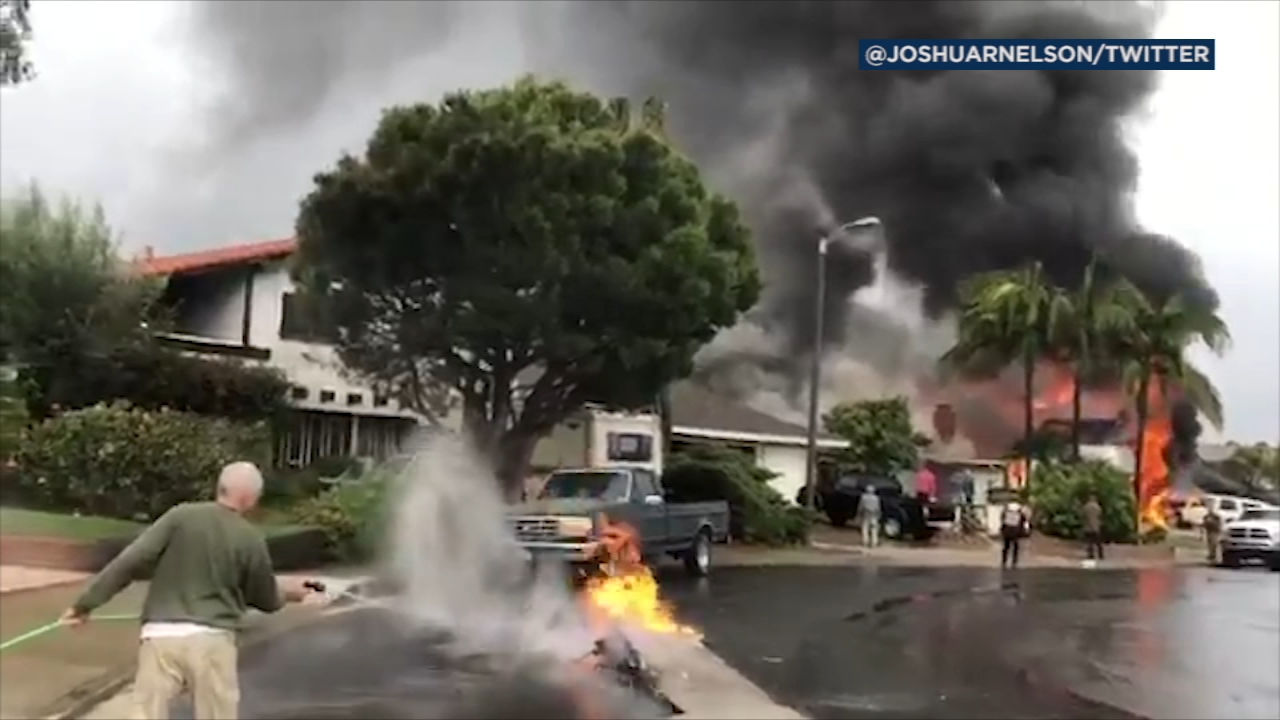