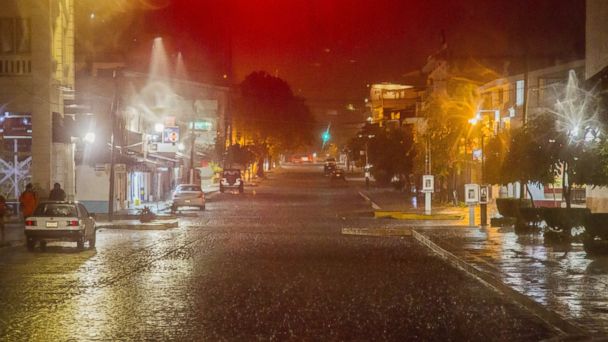 Hurricane Patricia -- deemed at one point the strongest storm in the Western Hemisphere -- made landfall in Mexico Friday night, coming ashore with 165 mph winds near Cuixmala, the National Hurricane Center said.

Since landfall, the storm has gradually weakened from a Category 5 to a Category 1 as of early Saturday morning with sustained winds of 75 mph, and is centered about 50 miles south-southwest of Zacatecas, Mexico, The Associated Press reports.

Patricia is currently moving north-northeast at 21 mph and forecasted to be a tropical storm later Saturday morning. It is expected to dissipate over Mexico and will no longer be a hurricane or tropical storm after Saturday.

There was no immediate indication of fatalities or major damage, although there had been reports of flooding and landslides, say authorities.

Cuixmala is about 55 miles away from the city of Manzanillo, and the AP said that the area of landfall had a low population. Manzanillo was also outside of the zone of hurricane-force winds.

Here is what ABC News knows about the potentially devastating storm.

Where is it headed?The National Oceanic and Atmospheric Administration warns that Patricia could impact at least five Mexican states: Michoacan, Colima, Jalisco, Nayarit and Guerrero through Saturday.

How strong is it?The storm has weakened to a Category 2 with sustained winds of 100 mph as of early Saturday morning.

The Associated Press, citing the U.N.'s World Meteorological Organization, says Hurricane Patricia was comparable to Typhoon Haiyan, which left more than 7,300 people dead or missing when that storm hit the Philippines in 2013.

What are some of the biggest concerns?The hurricane was expected to bring rainfall totaling 8 to 12 inches which could easily produce "life-threatening flash floods, mud slides (especially in areas of mountainous terrain), and high winds up to 130 m.p.h.," NOAA warns.

The proximity to the coast is also cause for concern since any storm surges could lead to coastal flooding.

"Large and destructive waves" can be expected, and swells could cause deadly surf conditions and dangerous rip currents, NOAA reports.

How can towns and local residents prepare?The U.S. embassy in Mexico City has issued a warning to all Americans in the hurricane's path.

"If you are in the hurricane warning area, you should make preparations immediately to protect life and property," the statement says.

State Department spokesman Mark Toner said there are tens of thousands of American tourists and residents in Mexico who cannot be rescued before the storm hits because the airport in Puerto Vallarta is closed as are all of the water ports. Toner said that Americans should follow the Mexican government's directions for finding shelter.

USAID's disaster response unit has an advisory team in Mexico, according to Toner.

Schools in the state of Colima have been closed and various areas have declared states of emergencies, according to the AP.

Puerto Vallarta, a well-known resort town popular with foreigners, issued evacuations today and many tourists are being sent to one of 14 shelters in the state, the AP says.