Yankees baseball operations at odds with business side 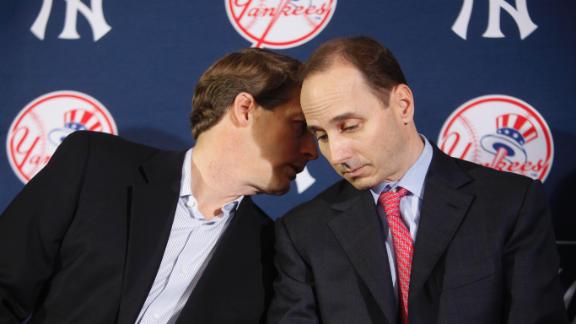 ESPN
By Wallace Matthews
NEW YORK -- As they head into the second half of the 2016 season, the New York Yankees are the definition of mediocrity with a 44-44 record. They face a daunting task to make the playoffs, sitting in fourth place in the AL East, 7 1/2 games behind the division-leading Baltimore Orioles and needing to leapfrog a half-dozen teams to qualify for the second wild-card berth.

And yet, there is a division within the inner ranks of the organization as to whether the team should be buyers or sellers at the upcoming non-waiver trade deadline.

According to a baseball source who spoke to ESPN on condition of anonymity, the opposing factions are composed of the baseball operations people, led by general manager Brian Cashman, who believe the team should sell off its assets and plan for the future, and the business side, which is led by owner Hal Steinbrenner and team president Randy Levine, who hold to the belief that the club is still in contention.

According to the source, the baseball people would be willing to trade the core of the team, players such as closer Aroldis Chapman, first baseman Mark Teixeira, starting pitchers Nathan Eovaldi and Ivan Nova, and right fielder Carlos Beltran, who has been the team's best hitter all season and its only position player to make the All-Star team.

Chapman, Teixeira, Beltran and Nova will be free agents after the season; Eovaldi is arbitration-eligible this winter and will be a free agent in 2018.

The source also said the Yankees would like to move center fielder Jacoby Ellsbury and catcher Brian McCann, a much more difficult proposition because of their contracts. Ellsbury is signed through 2020 at $21 million per year, with a club option for 2021 that includes a $5 million buyout, and McCann is signed through 2018 at $17 million a year. The Yankees are also said to be "willing to listen'' on setup man Andrew Miller, who had an excellent first half and accompanied Beltran and reliever Dellin Betances to San Diego for the All-Star Game.

The source said that the Yankees' erratic play this season has caused uncertainty within the ranks about how good this team really is. Last month, when the Yankees had just come off a five-game winning streak that got them back to .500 (31-31), Cashman said, "We're not going to be a seller unless ownership green-lights that. I'll have an honest dialogue with ownership every step of the way as I always do. If we feel at a date in the future that that's a necessity, then trust me, I'll recommend it, and they'll make a decision based on their comfort level. I'm always a brutally honest person."

Cashman was not available to comment, but the Yankees won three of four games from the Cleveland Indians, who lead the AL Central by 6 1/2 games, in the final series before the All-Star break, providing ammunition for the "don't sell'' faction.

"All the talk of buying or selling is speculation at this point,'' Levine said. "There's two weeks to go, and at that time we'll make a decision. You can't make any decisions until you have specific transactions in front of you.''

Levine refused to directly address questions about whether the hierarchy was divided over the direction the club should take at the Aug. 1 trade deadline.