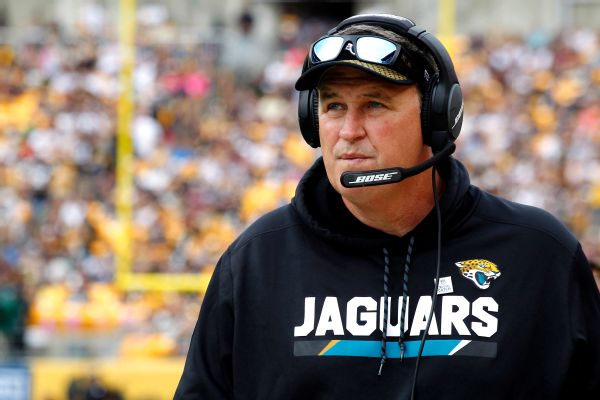 JACKSONVILLE, Fla. -- Helen Marrone is fielding a lot of calls this week, asking for help with tickets to the Jacksonville Jaguars' game at Tennessee on Sunday.

Most of the requests are from her family. Not all of them will be rooting for the Jaguars, though.

The wife of Jaguars head coach Doug Marrone has deep Tennessee roots, and Marrone said a large portion of Helen's family are Titans fans and will be rooting against their ticket hookup at Nissan Stadium.

"We're getting calls: 'Can we get some tickets to watch Tennessee kick your ass?'" Doug Marrone said Wednesday. "People you know [are asking]. I hear it."

Surprisingly, though, he doesn't have an issue with that because it gives him an easy out if he doesn't want to attend a wedding, birthday party, anniversary dinner, or a holiday barbecue.

"It's not bad because it gives me an excuse not to go to a lot of family functions," Doug Marrone said, "which, as you guys know, I'm not the best family function guy. I'm kind of in the corner. So now it's easy. Now it's like, 'Well, nuh-uh, they went to the game and they rooted for the Titans, so I'm not going to this function.'

"But there are a couple that are, obviously, rooting for us because there's a couple of them that actually like me."

Marrone said that includes his wife's immediate family. His father-in-law is Boots Donnelly, who coached at Middle Tennessee from 1979-98 and compiled a 133-80-1 record and took the Blue Raiders to seven I-AA playoff appearances. He's also a member of the College Football Hall of Fame.

Marrone has some Tennessee ties himself. He and his wife own a farm outside of Nashville, and he was also among those who interviewed with the Titans in January 2015 to replace the fired Ken Whisenhunt. The Titans chose Mike Mularkey, one of Marrone's longtime friends.

Marrone said he got another text from someone with a Tennessee connection this week, too. It wasn't a request for tickets, though.