49ers vs. Rams: More than 1,000 Niners fans show up to Saturday's tailgate in LA 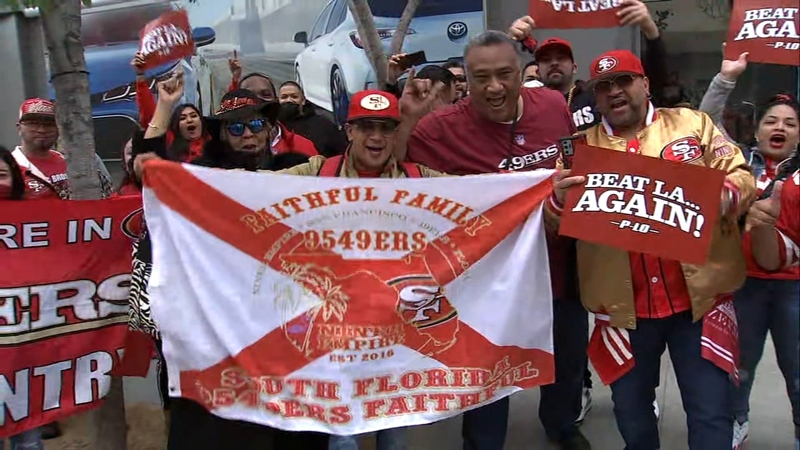 More than 1,000 Niners fans show up to Saturday's tailgate in LA

LOS ANGELES (KGO) -- We are now less than 24 hours away from the NFC Championship between the 49ers and the Rams in Los Angeles. Niners fans have arrived, are arriving, and continue to arrive before the Sunday kickoff. At Saturday's official 49ers tailgate party, well over a thousand 49ers fans showed up.

Fans didn't only show up to party, they came by the hundreds and packed in Tom's Watch Party restaurant at L.A. Live across from where the Lakers play.

"We got more fans here than are probably going to be at the stadium for the Rams," said 49ers fan Omar Valdes.

San Francisco 49ers fans have taken over Los Angeles. This makes the Rams donut shop we were at earlier look like nothing. @abc7newsbayarea pic.twitter.com/R2ZizXIt5Z

"Gilroy, California! Garlic capital of the world baby! We're coming at you and you know we're gonna get you!" yelled one 49ers fan.

Intensity at this 49ers party was an understatement.

"This is my deep red, with the gold, kind of glitter. I got to do it all for my boys," said 49ers fan Karen Nowack of Sacramento who continued by saying, "Yes I love this, I love this! We had no idea, we came a little earlier but this is insane, this is crazy, this is who we are."

When it comes to the Faithful, there are die-hards and then there's Fremont resident Rey Peña.

Over at Randy's Donuts on the other side of Los Angeles, Rams fans lined up for fancy donuts.

"Send those Niners back home to the bay!" yelled Rams fan Keri Noonan.

But the crowd at Randy's, not anywhere close in comparison to the number of 49ers fans who partied at L.A. Live Saturday, fans who had responses to those in blue.

RELATED: How you can win free tickets, airfare and hotel stay for NFC Championship game

"Well that was your first problem, you were believing someone that was on the Rams," said 49ers fan Kirk Herzog.

And if you think there was a lot of scarlet red Saturday, many here say there will be a whole lot more come Sunday.

"Somebody told me it's not going to be a sea of red, it's going to be a tsunami," explained ABC7 News reporter J.R. Stone to 49ers fan Amanda Rodriguez. Her reply was simply, "I agree, I agree, the sea is here and the tsunami will be there tomorrow!"