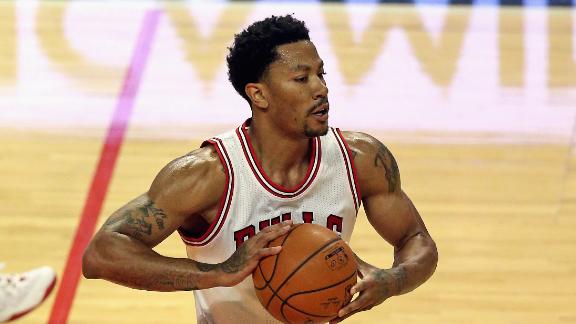 CHICAGO -- Derrick Rose's knee surgery was successful, and the Bulls guard should be cleared to return to the team in four to six weeks, general manager Gar Forman said Friday.

For Rose, the former MVP who had missed most of the previous two seasons with surgeries to both of his knees, this was positive news.

"There's the old saying that surgery's minor as long as it's on somebody else," Forman said. "But in this case, in comparison to what Derrick's had to go through the last several years, this surgery really was minor."

On Tuesday evening, the Bulls surprisingly announced that Rose tore the medial meniscus in his right knee for the second time in 15 months and would undergo surgery. But unlike his previous surgery, which knocked him out for the 2013-14 season, the Bulls believed this was a more minor injury.

Those beliefs, based on his exam and MRI results, were borne out Friday morning when team physician Brian Cole performed the meniscectomy surgery, where "the torn part or the damaged part of the meniscus was removed," Forman said.

"It was an anthroscopic outpatient surgery, so Derrick at this time is full weight-bearing," Forman said. "It was a quick procedure. He had it done and he was able to walk out of the hospital."

Rose could start working out at the team's practice facility Saturday, Forman said.

"We just got to be patient and just give him the time he needs to get through the rehab," Bulls coach Tom Thibodeau said. "This rehab is much shorter. The other ones, they were expected to be long."

Forman said they didn't know when Rose got injured, noting that guys are playing on undiagnosed meniscus tears around the league. When Rose, who missed 12 of 13 shots in Monday's win over the Milwaukee Bucks, complained of knee pain Tuesday, the Bulls got him an MRI, which diagnosed the tear.

"The way it was explained to me there was a flap where the tear was, they went in and shaved it out, that portion was damaged, and that should relieve the pain," Forman said.

In Rose's previous surgery, Cole repaired the meniscus, which comes with a longer rehab schedule. Rose was told then a second surgery on the meniscus would be possible.

Forman said Rose will be able to start "loading up" on his practice regimen in a week, doing drills and basketball activities, and should return for the end of the regular season.

Thibodeau said he didn't want to "skip ahead" and predict Rose's return, but was happy with the prognosis. Forman said he thinks Rose is raring to go.

"I talked to Derrick a couple times earlier this week and obviously he was disappointed in being injured, but I think he's in a really good place and is ready to attack the rehab the next several weeks," Forman said. "I know he's really anxious to get back on the floor with his teammates."

Rose's teammates, many of whom have played without him the past two seasons, are relieved he could return this season.

"I'm happy that he's going to be all right," Joakim Noah said. "Time will tell. Rehab is no joke. Especially he's been doing it for three years now. I think it's mental at this point, having to put in all this work all the time. It's repetitive, it's very boring, especially when the games are going on. You want to play."

If Rose, who is averaging 18.4 points and five assists, makes it back in four weeks, his first game would be against the New York Knicks at home on March 28. If he takes six weeks, he'd have three games left.

The Bulls have eight games in April, including one back-to-back in Orlando and Miami on April 8-9 before the playoffs begin. Chicago (37-22) beat Minnesota 96-89 on Friday night and is currently in third place in the Eastern Conference, a half-game ahead of Central Division foe Cleveland.

The Bulls believe because Rose already has 46 games under his belt, he won't have a problem starting again with so few games before the playoffs. Forman couldn't say if Rose would have minutes restrictions like he did earlier this season. For now, they just want to see him back on the court.

"Our anticipation is that he'll be back to full activity," Forman said.