CHP arrests suspect in connection to weekend freeway shootings, including one on I-580 in Livermore 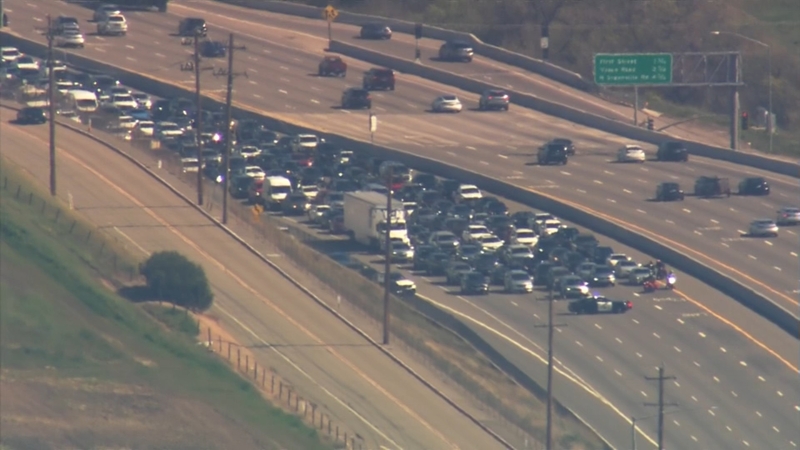 CHP investigating freeway shooting that closed WB I-580 in Livermore

The video used in this post is from a previous report on the incident.

When they arrived, officers found a male in a white Dodge pickup truck, whose identity has not been released, had been shot.

He was taken to Eden Medical Center for treatment. CHP says the injuries were not life-threatening.

CHP says the suspect immediately fled the scene, and was "identified as a solo male adult driving a brown sedan."

The shooting on I-580 on Tuesday that killed a sheriff's recruit marks the fourth unsolved, deadly highway shooting in Oakland in just eight months.

CHP officers found the suspect vehicle on westbound Interstate 580, near Strobridge Avenue, and took the suspect into custody at approximately 11:56 a.m.

Upon further investigation, CHP says investigators "linked the suspect in custody to an earlier freeway shooting that occurred at approximately 11:15 a.m., on westbound Interstate 205 near Interstate 5 within the CHP - Valley Division's jurisdiction."

One victim was critically injured in that shooting, CHP said.

The motive for these shootings is still under investigation.

The suspect, 24-year-old Armando Perez, of Hayward, was booked into Santa Rita Jail on suspicion of attempted murder, shooting at an occupied vehicle, and assault with a deadly weapon. CHP - Valley Division investigators are expected to file separate charges.

In a statement, CHP said, "Public safety is the top priority of the CHP. Freeway shootings are a serious crime and the CHP investigates each incident to the fullest extent. As these are both ongoing investigations, the victims' identities and extent of injuries are not being released at this time. If you or someone you know has information regarding either of these incidents, please call the CHP Investigation Tip Line at (707) 917-4491."