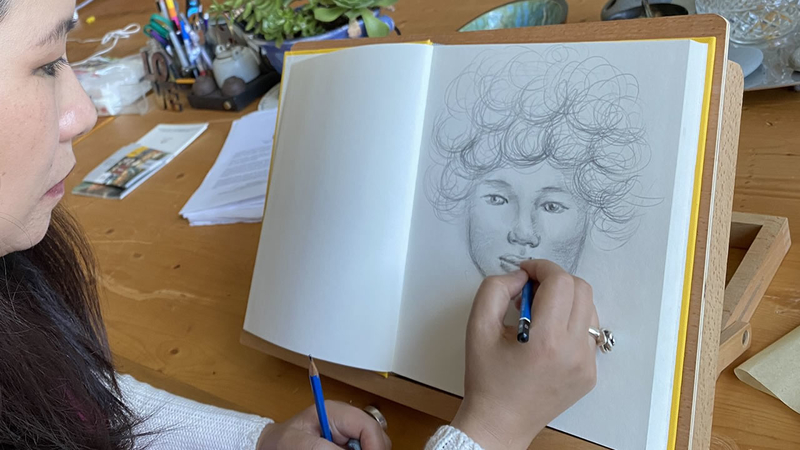 SAN FRANCISCO (KGO) -- An acclaimed San Francisco artist is using her skills to help police after she was brazenly assaulted while walking her dog.

Xiaojie Zheng retraces her steps outside her art studio along Missouri Street in Potrero Hill where she was suddenly hit in the face by a stranger Wednesday evening.

"It's a very traumatic experience. I felt like I couldn't even move. I literally cried...emotions piling up out of nowhere."

Xiao, as she's called for short, was in a state of shock, and regretted not acting quicker in the moment to document what happened. One nearby video camera only captured a tiny image of her assailant.

"I can't think fast...I could have taken a picture..." says Xiao, shaking her head.

What happens when you’re assaulted and the surveillance video is not that great?

If you’re an acclaimed portrait artist like Xiaojie, you make your own suspect sketch for police. #amazing pic.twitter.com/73yrCFSZPe

Little did she realize, she had something better: a photographic memory.

Xiao says she has been the victim of a violent attack in the past where the suspect was not caught. While she checks nearby businesses for more surveillance video, she's taking matters into her own hands, as recommended to her by friends and her neighbors.

RELATED: 92-year-old woman speaks out after being randomly attacked in NYC

Inside Xiao's light-filled studio, she show us her portfolio of commissioned portraits, spanning 25 years. Some paintings and drawings so realistic, they look like photos.

Sitting down at a desk easel, she starts to sketch for us an image that turns out to be a woman with dark features and large curls.

San Francisco police says the'll use Xiao's sketch in their investigation. Xiao will also use it, as a way to speak out, and heal and help others. Something she says culturally she was taught not to do.